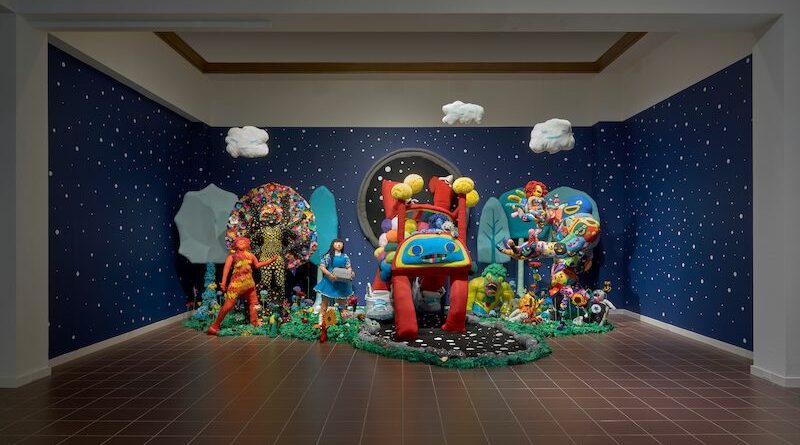 Culminating a multi-year series celebrating Texas-based contemporary Asian women artists, the Crow Museum of Asian Art of The University of Texas at Dallas will present JooYoung Choi: Songs of Resilience from the Tapestry of Faith.

Featuring the works of a Houston-based multidisciplinary artist whose paintings, videos, sculptures, animations, music, and installations merge the autobiographical with the fantastical, the exhibition will run Feb. 12-Sept. 4, 2022, at the Crow Museum in the Arts District at 2010 Flora Street.

JooYoung Choi: Songs of Resilience from the Tapestry of Faith marks the third and final offering of the museum’s Texas Asian Women Artists series, which kicked off in January 2020 to honor the work of contemporary Texas-based Asian women artists.

“I have admired JooYoung’s career for many years and am honored to have her as our third artist in our Texas Asian Women Artist series. The depth and complexity of her work invites viewers to step into an alternate world of her own creation and, subsequently, into her own personal experiences, thoughts and emotions,” said Amy Lewis Hofland, senior director of the Crow Museum of Asian Art of The University of Texas at Dallas. “This opportunity to share such intimate space speaks to JooYoung’s naturally giving nature as an artist and a person.”

JooYoung Choi, known as a multidisciplinary world builder, uses explosive color through a variety of mediums to document the interconnecting narratives of a highly-structured, expansive, fictional land she has devised and titled the Cosmic Womb.

In her vibrant and imaginatively charged work, Choi explores issues of identity, belonging, trauma, and resilience through the sci-fi/fantasy genre. Born in South Korea and brought to the U.S. through adoption, her inspiration comes from her own personal journey and experiences and the media of her childhood.

“In a time when many are experiencing feelings of loss, sorrow, displacement, invisibility and oppression, JooYoung Choi’s Cosmic Womb uses imagery, narrative, and sound to present a bright alternative world and an inclusive place of belonging,” said Jacqueline Chao, senior curator of Asian art at the Crow Museum of Asian Art of The University of Texas at Dallas. “Whether drawn from her own personal experiences, or mirroring a real-life situation, or based purely from the imagination, her work attempts to bring hope to anyone who has experienced challenging situations.”

In addition to presenting a variety of paintings and large-scale soft-sculptural works, the exhibition will also include the first museum screening of Choi’s newest film Spectra Force Vive: Infinite Pie Delivery Service, which features an ensemble cast of puppets, animated characters, human actors, and was made with contributions from actors, voice talent, artists, musicians, and puppeteers from around the world.

“Each work I create is connected to an imaginary world I call the Cosmic Womb, a fantastic realm filled with wondrous creatures, extraordinary heroes, terrible villains, epic intergalactic battles and daring adventures,” said Choi. “Although the stories are rooted in science fiction, the message behind each tale is rooted in truth. At the core of each piece is my faith and my enduring belief in an infinite force energy – a love beyond love that connects and flows through us all.”

Choi has a BFA from Massachusetts College of Art and Design and an MFA from Lesley University in Cambridge, Mass.