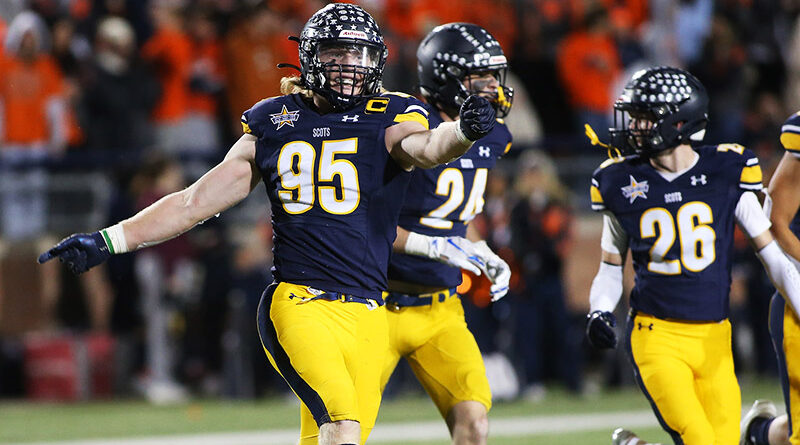 His toughness and tenacity as an edge rusher gave Jack Curtis a chance to play Division I college football. On Feb. 2, he turned that opportunity into a reality.

He is one of four HP senior football players who intend to play at the college level. Running back Ben Croasdale accepted a preferred walk-on offer from Furman University (in South Carolina) and receiver Luke Rossley will be a preferred walk-on at the University of North Texas. Plus, kicker Jack Stone signed with Michigan State during the early signing period in December.

He’s a true leader in everything that he does.

This season, Curtis recorded 65 tackles (24 for loss), including 11 sacks and two fumble recoveries in 12 games for the Scots.  He was named the MVP in District 13-5A by league coaches — a rare honor for a defensive player.

“He’s a true leader in everything that he does. He makes us better in every way,” said HP defensive coordinator Bobby Leidner. “He makes plays that he has no business making. It’s impressive to watch.”

Curtis, who amassed 122 tackles and 21.5 sacks in three seasons at the varsity level, said he first received an offer from Air Force after his sophomore season. He has visited the campus in Colorado Springs twice since then, including an official visit in January.

“They believed in me every step of the way. That really stuck with me,” said Curtis, who chose the Falcons over Army and Princeton. “They made me feel at home.”

Air Force, which plays in the Mountain West Conference, capped a 10-3 season with a victory over Louisville in the First Responder Bowl at SMU.

After graduating in May — and playing baseball for HP this spring — Curtis will head to the academy to begin basic training in June. Although he was unsure at first, he has embraced the military aspect of his college decision.

“I want to play football and be a leader in this country,” he said.

Rossley was one of the top receiving targets for the Scots this season with 24 catches for 269 yards and a touchdown. Croasdale rushed for 385 yards and seven scores.

“It was always a dream of mine to go play college football somewhere,” Rossley said. “I’m super excited that North Texas is giving me a shot.”

Send Us Your Halloween Pictures