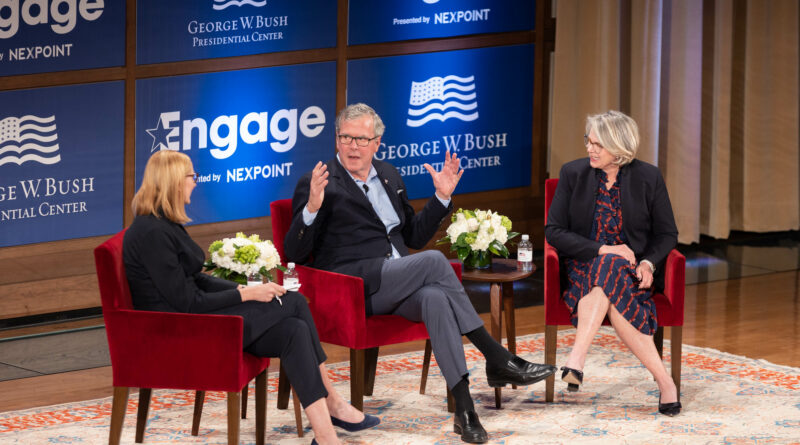 Spellings, Bush (But Not That One) Talk 20th Anniversary of No Child Left Behind

Touted as the means to hold schools accountable, the No Child Left Behind Act received bipartisan support in 2001.

Twenty years later, and two years into a pandemic that continues to disrupt learning, two people involved in crafting that legislation spoke at the Bush Institute on a chilly February night.

Jeb Bush was governor of Florida when his brother — President George W. Bush — tasked his administration with crafting legislation that would demand accountability and ostensibly standardize education across the country.

Florida, Spellings said, was ‘way ahead of the game’ when it came to what the act was meant to create. Bush, who had joked earlier in the evening that he (like many governors at the time) wasn’t too sure about the federal intrusion, said, “I forgive you now.”

Spellings said, by and large, she was happy with what the act accomplished – specifically in the arena of annual testing and data collection. Still, she acknowledged there were missteps and that it wasn’t the perfect bill.

“(There was) too much one-size-fits-all,” she said. “Some misstarts on implementation. But for the most part, I’d do it again.”

Bush marveled at the bipartisan support the bill had.

“You had some of the most liberal members of Congress with John Boehner and … solid, traditional conservatives, led by the president and Margaret and others in a bipartisan fashion passing a bill that was desperately needed, I’d say, in almost all states,” he said.

The bill, Spelling said, was built from the idea that there is a “moral imperative to really see about the needs of every single student.”

Spellings also said that she didn’t think the bill would’ve passed today, given the calls during the pandemic (and even before then) to stop “high-stakes” testing.

“If people actually knew what this was going to mean in their schools and their communities, we probably couldn’t have passed it 87 to 10,” she said. “It clearly exposed these incredible gaps.”

Thanks to the pandemic, students didn’t take the State of Texas Assessments of Academic Readiness (STAAR) test in 2020, and in 2021 accountability ratings were paused for a second year.

“In Texas, we’re going to go two years without any statewide testing and at least four years without school ratings,” Spellings said. “There’s a lot of murkiness around that. But I like to say we need to care enough to find out.

“We have to take back the moral high ground and say, ‘Listen, we can’t help your kid if we don’t know where that kid is,’” she added. “How do we get (the horses) back in the barn? We’ve got to rebuild the political imperative.”

Bush said that most people think there should be some way to assess where children are in terms of education — but that there is room for innovation and improvement when it comes to how.

“I think there’s probably someone that could probably come up with a test where you could determine where a kid stands, get it back in the hands of a teacher and a parent so that there could be not just an awareness of where they are, but a strategy on how to rectify their deficiencies and make this something that is part of the learning experience.”