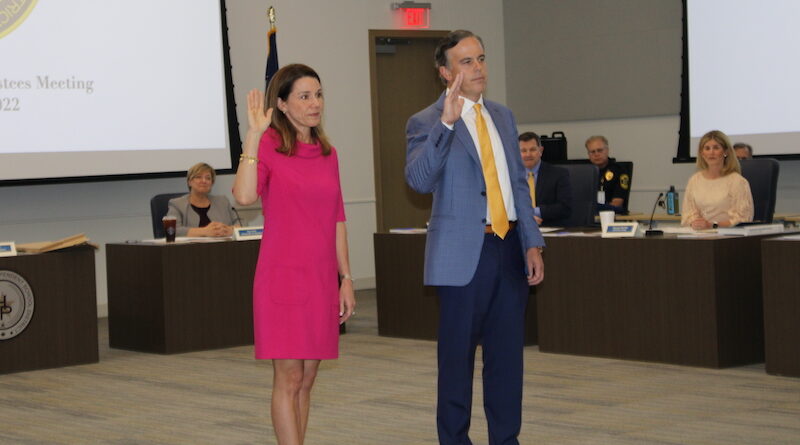 The newly-elected Highland Park ISD board of trustees took the oath of office Tuesday with one notable exception – the winner of the place 4 seat held by incumbent Jae Ellis after challenger Tyler Beeson requested a recount.

In unofficial results, Ellis, who was first elected to the board in 2019, led Beeson, who works in wealth management, with 51% of the vote (4,184 votes) to Beeson’s 49% (4,041 votes). The place 4 trustee will be sworn in at a later date after the conclusion of the recount process.

Ellen Lee, who led insurance executive Spencer Siino in the place 5 seat on the Highland Park ISD board of trustees (held by former trustee Edward Herring, who was first elected to the board in 2016) with 59% of the vote (4,837 votes) in unofficial results to Siino’s 41% (3,384 votes).

Following the administration of the oath of office, the board voted to keep president Tom Sharpe in his role, place 2 trustee Maryjane Bonfield as vice president, Benson as secretary, and place 1 trustee Doug Woodward as finance chair.

“You’ve served faithfully, intelligently, thoughtfully, and passionately,” Sharpe said of Herring before recognizing him with an award after welcoming the new trustees.