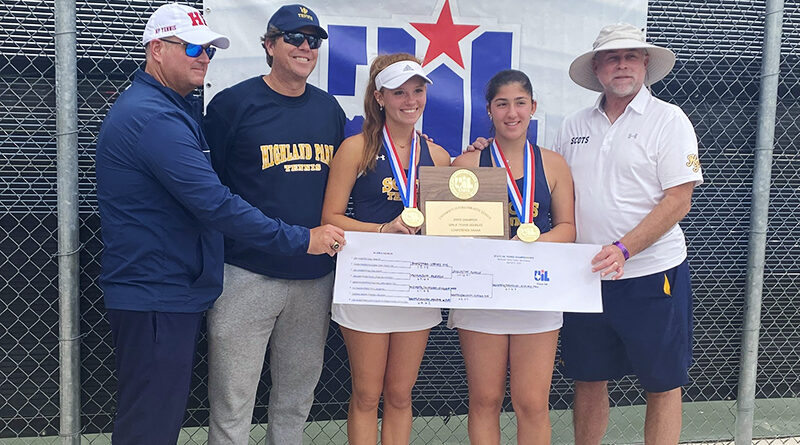 After her junior season ended with a loss in the championship match at the Class 5A state tennis tournament, Highland Park’s Isabella McElfresh wanted redemption.

She accomplished that goal, although with a different partner and in a different division. Instead of mixed doubles alongside Ray Saalfield, she won a state title with Eden Rogozinski in girls doubles.

The decision to split up last year’s silver medalists came from longtime HP head coach Dan Holden, whose program has always specialized in dominant doubles teams. In this case, he figured shuffling arguably the two best players in his program would give the Scots a chance at two spring titles instead of just one.

While Saalfield and Carl Newell dropped a three-set heartbreaker in the boys doubles championship match, McElfresh and Rogozinski continued a dominant season that started with HP’s state title during the fall team season.

“We definitely practiced a lot last spring, even when we weren’t playing together,” McElfresh said. “We would always talk and give each other tips.”

With everything that Dan has taught us, we wanted to make him proud.

That chemistry paid off for a tandem that lost only one match all season and didn’t drop a set during postseason play. They sealed the deal with a 6-2, 6-3 victory over Amarillo’s Allex Gonzales and Morgan Rose in San Antonio.

It marked the first state title in girls doubles for the Scots since 2015, when HP was in Class 6A. McElfresh is a senior, but Rogozinski will return next year along with her younger sister, Mia, who finished third in mixed doubles at the regional tournament.

“I had no idea how to play doubles until I got here. The coaches really emphasize that,” McElfresh said. “We wanted it for ourselves, but with everything that Dan has taught us, we wanted to make him proud.”

The state championship will be the last at HP for Holden, who plans to retire after 22 seasons of turning the Scots into the most decorated high school program in Texas, with dozens of state crowns in the fall and spring seasons.

“This was a bittersweet decision. I struggled with it,” Holden said. “I love these kids, and I love this program, but it’s time. I feel great about what we accomplished.”

Holden, who coached at the college level with Louisiana-Lafayette in the mid-1990s, plans to keep coaching privately and supporting the Scots behind the scenes.

“It will be great to watch them do well,” Holden said. “The program is in great hands.”