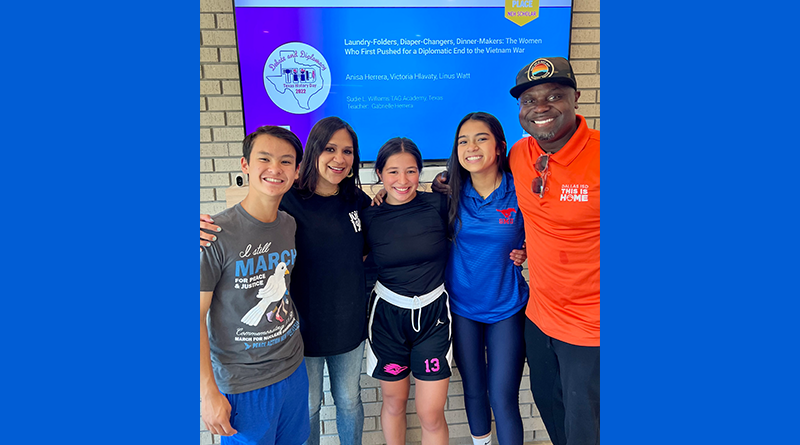 The trio, made up of Victoria Hlavaty, Linus Watt, and Anisa Herrera, competed at the national contest after advancing through the school, local, and state levels. They won first place among 94 national qualifiers in the Junior Group Exhibit category, each earning the title of “National Endowment for the Humanities Scholar” and $1,000.

“To make it to the national contest is always a remarkable achievement, said NHD executive director Cathy Gorn. “This year’s theme of Debate and Diplomacy is so topical as we are at a critical moment when teaching history and assigning historical books in the classroom are hotly debated subjects. Yet, we see that our students want to learn about the whole U.S. history, that they want to be engaged and informed. We are so proud of their efforts to uncover, analyze, and share history in the projects they choose to pursue.”

Their project titled “Laundry-Folders, Diaper-Changers, Dinner Makers: The Women Who First Pushed for a Diplomatic End to the Vietnam War” highlights the work of Women Strike for Peace and their diplomacy to advance nuclear disarmament, reveal Vietnam’s hidden cruelty, secure the release of prisoners of war, encourage women as activists, and cement women’s roles in the prevention of war.

Hlavaty, Watt, and Herrera started working on the project in September and continued improving it through the state competition until the May entry submission deadline for the national competition. Navigating books, archival news articles, library collections, and speaking to members of the group, they put their project together which was announced the first place winner in mid-June.

The team was coached by Gabrielle Herrera, a Sudie Williams TAG Academy GT teacher, who won national honors in National History Day as a student at a Houston public school.

Hlavaty will attend Hillcrest High School as part of its IB program in the fall and Watt and Herrera will attend the School for the Talented and Gifted at Yvonne A. Ewell Townview Center — all as rising freshmen.

To view a digital version of the group’s winning project, visit this document.