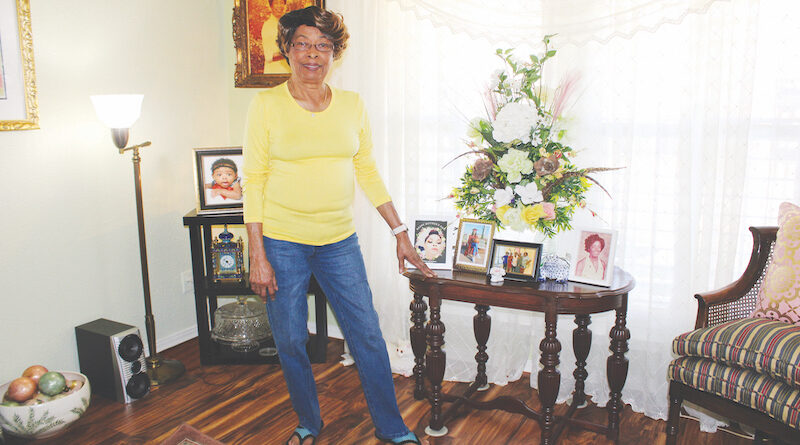 A photo displayed in Mary Puckett’s Oak Cliff home shows World War II veteran Charles Lemon, a Park Cities man she took care of for years before his death in 2021.

She has spent more than 50 years as a home healthcare provider, often working in the Park Cities, and has plenty of photographs and letters from the families she served.

“All of them (are my) family because I loved all of them,” Puckett said. “I stay with them so long that they become a part of me.”

“She worked during daytime hours for us basically five or six days a week for years taking care of my dad who was in a slow decline,” Neel said. “She was kind of like an angel sent from heaven to help us out.”

The family thanked Puckett for her care in Charles’ obituary.

“She would sometimes have to take him to the doctor or the hospital,” Neel said. “She handled that all just perfectly, interfaced with medical providers and things like that, cooked his meals, and she’s just a very caring person. As far we’re concerned, she was an extension of family.”

Puckett began working in healthcare when she was 25.

“You have to love what you do, and it’s just easy – just like a breeze,” she said. “You get some people who are very, very ill, but that’s when you enjoy your work because you’re doing something to help.”

When not at work, Mary also served as caregiver for her family.

Her husband, William, suffered a stroke more than 20 years ago, and she and one of her daughters, Tammy, cared for him at home for years.

“I worked 12 hours a day,” Puckett said. “My daughter (cared for him) during the day; I took care of him at night.”

But Tammy suffered from kidney failure. After she and her father died about a year apart, Mary helped raise Tammy’s daughters, Keeyona King and Angela Leblanc.

“Words can’t explain how beautiful she is as a person,” Angela said of her grandmother. “She just gave me a lot of wisdom through life growing up.

“She picked up where my mom left off and taught me everything. She helped me graduate through school,” Angela said. “She loves her flowers; she loves to plant; she loves to bake; she loves to cook. Every year, we have Thanksgiving and Christmas at her house, and it’ll be me and her in the kitchen cooking.”

“She raised me and my kids,” Keeyona said. “She’s a very good person. I mean she’s reliable, prompt … If you say that you need her at any time, she’ll be there.”

Mary still enjoys her work and keeping busy. Keeyona understands, “Personally, I just feel like she needs this because she doesn’t like sitting in the house and just looking.”