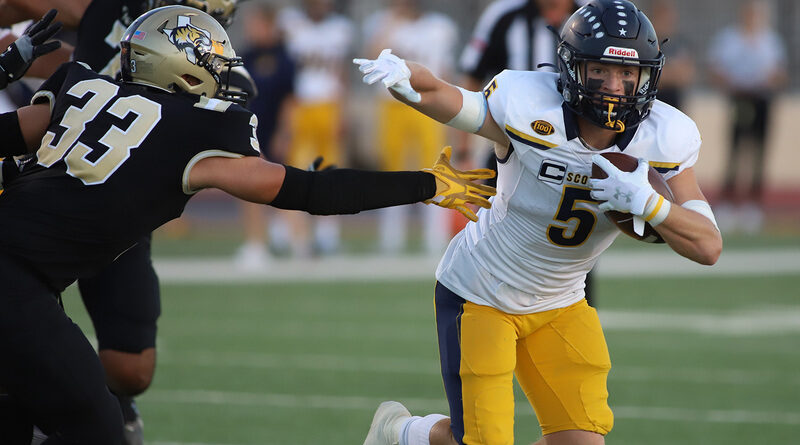 IRVING — Jay Cox showcased his versatility and made the most of his opportunities against an overmatched opponent.

The Highland Park senior scored six first-half touchdowns as the Scots dominated on both sides of scrimmage during a 63-0 shutout of Irving on Thursday at Ellis Stadium.

Cox scored on a 12-yard run on the first snap for the unbeaten Scots (4-0, 2-0), who capitalized on favorable field position while scoring on their first six drives.

Cox reached the end zone on five of his six carries in the game, which totaled 43 yards. In addition to capping all four of HP’s first-quarter possessions with touchdowns, he returned a punt 67 yards for a score in the second quarter.

“He made a great punt return,” said HP head coach Randy Allen. “He’s a playmaker, and when we get the ball to him in space, he’s got a knack [for scoring touchdowns]. He’s a really good player.”

The Scots capped the first half with a 41-yard touchdown pass from Brennan Storer to Luke Herring to stretch the margin to 49-0 at the break.

That enabled many reserves to see meaningful action during the final two quarters. Frank Mousa ran for a game-high 51 yards and two late scores.

Storer connected on five of his eight passes for 140 yards — an average of 28 yards per completion. He spread the ball among multiple receivers, as did Warren Peck and Ethan Berde in relief.

Meanwhile, the Tigers (1-2, 0-1) managed just 42 total yards and did not cross midfield until early in the fourth quarter against a smothering HP defense. They completed just four of 15 passes for eight yards.

Irving’s miscues were especially costly on errant punt snaps, one of which was recovered by HP’s Barrett Denton late in the first quarter.

“Our defense did a great job,” Allen said. “Every game we get experience, our guys are going to get better.”

It marked the first shutout for HP since the 2020 regular-season finale against Wylie East, and the largest margin of victory since a 79-0 shellacking of Sunset in October 2019.

Following their first District 7-6A road game, the Scots will have a bye week to prepare for a highly anticipated matchup against Jesuit on Sept. 30 at Highlander Stadium.

“This is a week where if you’re injured, we can rest you, and it’s a week of fundamentals. We can recharge and get our motor running, but it’s also a time to add some new wrinkles and evaluate our team to see where we can improve, “Allen said. “It’s right where we want to be.”