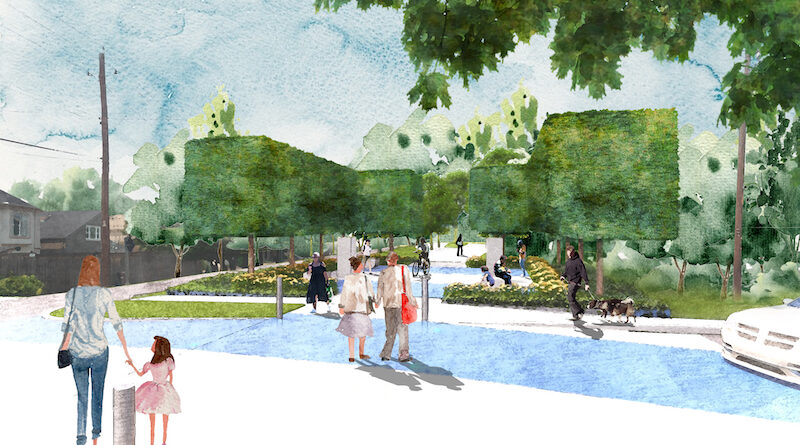 Friends of the Katy Trail will soon begin work on a new entry plaza and safety improvements where the trail intersects Harvard Avenue.

The new plaza is made possible by a $1 million donation from donors who wish to remain anonymous.

“We are very fortunate to benefit from the foresight of this generous family, who understands the importance of the Katy Trail to our city, and who strives to make it an even greater community asset,” said Amy Bean, executive director of Friends of the Katy Trail.

The plaza was designed by SWA Group, the local landscape architecture firm responsible for many of the trail’s enhancements. The design incorporates two outdoor rooms, one on each side of Harvard, surrounded by large trees that will be pollarded, a pruning method that removes the upper branches. Each space will incorporate pavers and contain lighting and stone benches for trail users.

Situated next to Highland Park, the new plaza will echo the design of David’s Way, the entry plaza at Knox Street, the trail’s other street-level crossing.

This project includes new signage leading into each side of the plaza and a narrowing of the trail so users reduce their speed approaching the plaza and Harvard Avenue. Additional street signs, warning lights, and other visual cues will be added on Harvard to slow vehicles and promote stopping when pedestrians and cyclists are present.

The project will be built in two phases to accommodate the planned city of Dallas conversion of nearby McKinney and Cole avenues into two-way streets. The first phase, with construction beginning in early 2023, will focus on the two plazas, new signage, and landscaping. The second phase will add additional safety enhancements on Harvard and will be completed after the city finishes the street conversion project.

The last entry plaza built on the trail was in 2018 at Cambrick Street, which was part of the Trail capital campaign project that added a soft-surface path from Knox Street south to Blackburn.

Friends of the Katy Trail, a 501(c)(3) nonprofit, manages and operates the Katy Trail. The Friends partners with the Dallas Parks and Recreation Department and the city of Dallas, which owns the Katy Trail land.