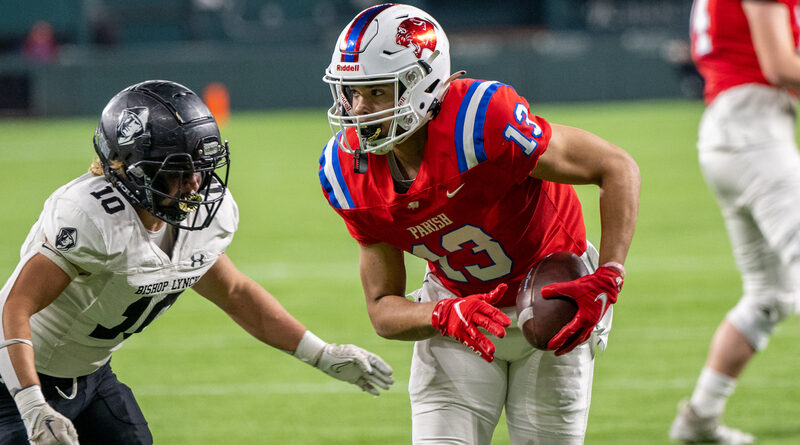 For the second time this season, a well-rested Parish Episcopal overwhelmed Bishop Lynch, this time with a berth in the state semifinals on the line.

Behind a season-best offensive outburst, the Panthers cruised to a 56-14 win over the Friars on Saturday at Globe Life Field in Arlington.

The victory puts Parish two wins away from a potential fourth consecutive TAPPS Division I state championship. The Panthers (10-1) advance to meet Houston St. Thomas on Saturday in Belton.

After a first-round bye in the playoff bracket, the Panthers were firing on all cylinders against their district rivals. Sawyer Anderson was 21-of-23 passing for 320 yards and four touchdowns.

Maddux Reid ran for two scores, Chase Burton had two touchdown receptions, and Bryson Fields also scored twice — once on a catch and the other by returning an attempted onside kick to start the second half.

After a seesaw first quarter, the Panthers took the lead for good on a 15-yard touchdown toss from Anderson to Burton early in the second frame, which helped account for 42 unanswered points. Parish reached the end zone on seven of its first eight offensive possessions.

Parish extended its winning streak to seven games, the last six of which have been by an average margin of more than 36 points.

That stretch includes two victories over the Friars (2-9), both of which came following a gap in the schedule. The Panthers also trounced Bishop Lynch 44-0 in their district opener on Oct. 7.

Next up will be a tougher test in St. Thomas (10-1), which held off Trinity Christian 27-21 in overtime in its quarterfinal matchup on Friday.