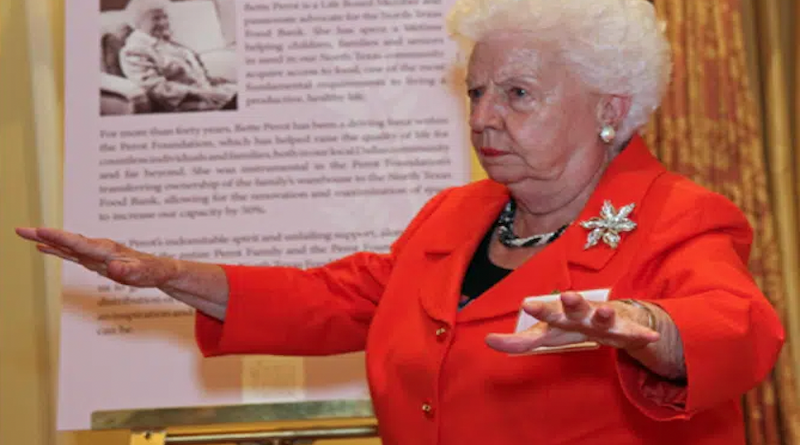 Bette, sister of the late Henry Ross Perot, served as vice president of the Perot Foundation for 26 years, and on the board of the North Texas Food Bank, where she was later named a life board member.

She also served on the Board of Governors at SMU, St. Mark’s School of Texas Board of Trustees, the Saint Michaels’ School Board, the Visiting Nurses Association, and the C.C. Young Community Board.

Bette, along with Ross and the Perot Foundation, bought a facility on Cockrell Hill Road from Trammel Crow in 1987 and leased it to the North Texas Food Bank (NTFB) for $1 per month until the Food Bank was able to purchase it in 2004. The NTFB operated from that facility until 2018 when it moved to the newly constructed Perot Family Campus. That original building still houses NTFB’s social services team and serves as a home to Crossroads Community Services, one of the NTFB’s feeding partners, serving the southern sector of Dallas.

“Bette meant a lot to me,” said one of NTFB’s founders, Liz Minyard. “She was witty, smart, and always thought ahead. I learned so much from her over the years, and the Food Bank meant so much to her.”

“Bette’s impact is beyond measurable but can be felt across North Texas by all of us that have benefited from her wit, wisdom and extreme generosity,” NTFB CEO Trisha Cunningham added. “Today, a child is performing better at school because he has access to proper nutritious foods. A parent may be resting easier because she was able to feed her family. And a senior did not have to make a hard choice between paying for food or medicine. These are examples of Aunt Bette’s legacy.”

The community pantry at St. Philip’s School and Community Center, which opened on her 90th birthday in 2019, also bears the name of “Aunt” Bette, as does the Girl Scouts of Northeast Texas’ Camp Bette Perot.

“Bette Perot’s dedication to hunger relief is astounding, as she was instrumental in the founding of North Texas Food Bank, one of our long-standing community partners, and she personally planted the seeds for St. Philip’s first food pantry over twenty years ago,” a post on St. Philip’s School and Community Center’s website reads. “Through Aunt Bette and now her legacy, the Perot family will continue to positively affect the lives of tens of thousands of neighbors and fellow citizens facing food insecurity for decades to come.”

After graduating from Texas High School in 1946, Bette went on to receive a degree in Secondary Education from TCU and joined the Fort Worth Girl Scout Council as a field director while earning her master’s degree in educational administration from the University of North Texas.

She started her career as an educator at Meadowbrook Junior High School in Fort Worth and was quickly promoted to school counselor and vice principal. Bette also served as vice principal of Southwest High School. 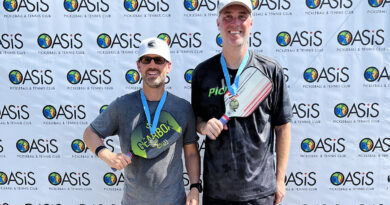 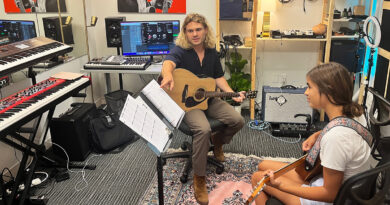 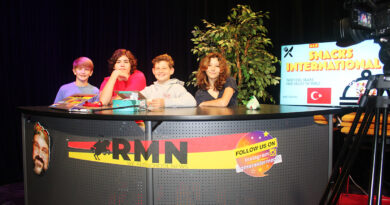 Behind The Scenes of Raider Media News