Following hot on the heels of Zeal Med Spa, the European Wax Center is the second European-inspired beauty salon to open at the Preston-Royal intersection in recent months. The Preston Royal Village spot had its soft launch on Fathers Day.

As the name implies, European Wax Center, which has more than 50 locations in Texas, is dedicated waxing. I personally have no basis from comparison, as I tend to avoid such establishments for fear of being mistaken for a customer, but general manager Carol Baycroft (who runs several EWCs and Massage Envys in the area), assured me this is top-of-the-line stuff. The wax comes in these little black droplets that soften between your fingers. And there are none of those painful strips, a la The 40-Year-Old Virgin.

The most interesting thing to a non-waxer like myself? Waxing salons commonly “double dip” or recycle their wax. EWC does neither, Baycroft said. (Few things have disturbed me more of late than the thought of being slathered in wax that has just been used to remove somebody else’s hair.)

First-time customers can a free wax. Ears, eyebrow, or nose for men, bikini line, underarm, or eyebrows for women. Baycroft offered to set me up with an appointment. I declined. I like my ears/eyebrows/nose/bikini line just fine, thank you very much. 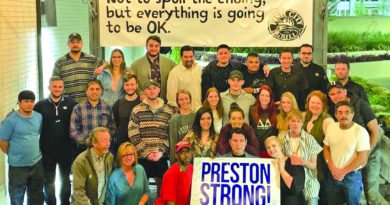 Tornado Came in Like a Wrecking Ball; Demolition Crews Go Next