Her name’s Karen Luter. His name is simply Jackson.

I always try to be careful when editing the captions we receive with submitted party pics. And there’s a very good reason for being careful. Not long after I took this job, we published a photo of Maria and John Smith [I’ve changed the names, obviously]. A few days later, Jane Smith called me and clarified that she is Mrs. John Smith. Maria is “just his South American whore.”

Anywho, the other day I received the photo you see here, which was taken at a mediabistro.com happy hour hosted by luxury bedding boutique Duxiana. The supplied caption said “Jackson, Karen Luter.” So I e-mailed the publicist and asked, “Is the guy pictured with Karen Luter named Jackson Luter, or is he just ‘Jackson,’ a la ‘Cher’ or ‘Madonna’?” She assured me that his name is simply “Jackson” and that he’s a concierge at Barneys New York. Of course he is. 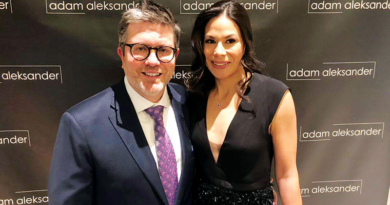 3 thoughts on “Not Michael. Not Jesse. Not Action. Just ‘Jackson’”