High school students are often told that hard work now will pay off later. Of course, that sentiment generally refers to a diploma and acceptance into college. For six students at Thomas Jefferson High School, it meant their picture was delivered to 2.5 million Dallas homes.

As a reward for being exceptional members of the United Way program “Destination Graduation,” Angel Galvan, Kimberly Zepeda, Jose Balderas, Heber Medrano, Stephanie Cervantes, and Cynthia Jimenez were featured on the cover of the 2011 AT&T Yellow Pages and White Pages with principal Edward Conger. The covers were ceremoniously unveiled on Thursday at Thomas Jefferson High School.

“This shows students what they can accomplish when they set goals and achieve them,” said Gary Godsey, CEO of United Way of Metropolitan Dallas.

Destination Graduation is in its fifth year at Thomas Jefferson and has around 200 participants annually. One of the hallmarks of the college-readiness program is a semester-long Princeton Review class taught by a certified instructor. The class primarily serves juniors and seniors and focuses on test-taking strategies, study skills, and how to apply for financial aid. Balderas, a junior, took the class last semester and saw his SAT score improve from 1220 to 1540.

“It’s cool because I learned new techniques, and it made it really easy for me,” he said.

One of six siblings, Balderas is poised to become the first member of his family to attend college. He is planning to major in math at the University of Texas in Austin. Balderas said his little brother was especially excited about him appearing on the cover of the phone book and had been showing it off to friends.

In the digital age, some  might consider a physical listing of addresses and phone numbers obsolete. But Holly Reed, AT&T’s regional vice president of external affairs, said the hard copy is in high demand despite the same information being available for free online and in an iPhone app.

“We still have a lot of customers who prefer to get their information from the real Yellow Pages,” Reed said. “We want to be able to provide information in whatever format the customers want it.”

DISD Superintendent Michael Hinojosa said Thomas Jefferson appearing on the cover of the phone book is a “culmination” of a number of improvements the school has made.

Thomas Jefferson has earned an “academically acceptable” rating from the Texas Education Agency for four years in a row after being designated an “unacceptable” school in 2006.

This is the second time DISD students have graced the cover of the phone book. Students from the School for the Talented and Gifted at Townview Center were featured when it was named the nation’s number one high school in 2006. 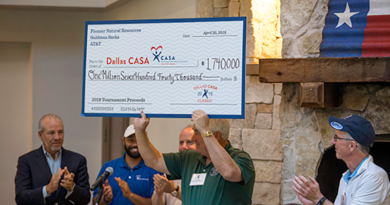