In May 1993, a dozen Highland Park High School athletes won state championships in three sports. But only one of them also lost a parent.

Elizabeth Thayer was a member of the 1,600-meter relay team that capped an undefeated season by recording its fastest time of the year at the state track meet. That race was run in Austin on the same day that Thayer’s father was buried in Dallas.

Three days earlier, Frank Thayer was found dead in the house on McFarlin Boulevard where he lived alone. He was a diabetic, so authorities believe he had a seizure in his sleep and suffocated.

Her family and teammates would have understood if Elizabeth — a 16-year-old sophomore — gave up her place in the state meet to an alternate. But she and her brother boarded a plane to Austin after the funeral.

Lesley Clark Rhodes, the anchor leg of the relay team, said Elizabeth had the full support of her fellow runners. The four of them had a pre-race ritual of praying while holding onto a baton, and Lesley said she was struck by how at peace Elizabeth seemed as they prayed before the state finals.

“I really feel like her dad was with us, and it just gave her this inner strength and drive to compete and focus,” Lesley said.

Elizabeth Thayer is now Elizabeth Speicher, a University Park mother of two. Her husband, Drew, was her boyfriend in high school, and Elizabeth said he was in a unique position to support her as she grieved. When Drew was 7, his father died in a boating accident.

“That was certainly Lord-driven for us to be together at that time,” Elizabeth said. “Because another high-school-senior boy wouldn’t have handled the situation the way he did.”

Because Kristen Cox and Ginny Woodward graduated in 1993, Elizabeth and Lesley returned to the state meet in 1994 as juniors with a new pair of teammates, sophomore Brooke Blessing and freshman Stefani Chaney. They finished in third place.

Coincidentally, Lesley’s husband, Burton Rhodes, sells real estate with his father and brothers. But even if the former teammates’ families weren’t in the same fields, Lesley said all the hard work they put into their athletic endeavors created a lifelong bond.

“It really remains one of the greatest memories of my life,” she said.

ALSO IN THE NEWS …
The school financing legislation formally known as Senate Bill 7, but also referred to as “Edgewood IV” and “Son of Robin Hood,” made news throughout the year. In May, the Legislature passed the bill, which gave property-rich school districts five options for redistributing their wealth, including consolidating with a poorer district. In August, HPISD put only one option on the ballot: sending money directly to Austin to purchase “attendance credits.” Voters approved this option, which was seen as a stopgap until a lawsuit seeking to overturn the bill could be heard. In December, state District Judge Scott McCown upheld the bill.

On April 8, police busted a teenage drinking party in the Kaufman County town of Combine and arrested 121 students, most of whom attended Highland Park High School. This news inspired five separate headlines on the cover of our April 14 edition.

CHANGES AT THE TOP
In January, Frank Bevers stepped down as head football coach at Highland Park High School for a second time. The Scots’ 134 wins under Bevers were a school record until Randy Allen led the team to his 135th win in 2010.

In May, newcomers Brownie Watkins and Bob Dransfield were elected to the HPISD Board of Trustees, and board president Michael Boone was re-elected. All three trustees had to fend off at least one challlenger, a rarity in a Park Cities election.

Want to Purchase a Photo? 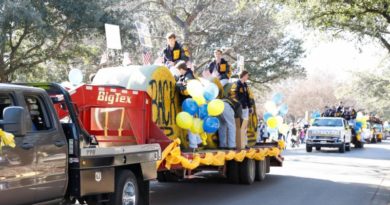