Irish style fused with Texas hospitality reigned when Rosemary Walker and Thomas Nicholson exchanged their wedding vows Oct. 8 at St. Mary the Boltons, Chelsea. The lovely ceremony was officiated by the Rev. Ruth Lampard with a major highlight being the lilting Irish folk singing by Emma and Tessa Nicholson, sisters of the groom. A reception of dining and dancing followed, with toasts and speeches aplenty, at Merchant Taylors’ Guildhall, in The City of London.

The bride is the daughter of Dr. Geoffrey and Mrs. Erica Walker of Highland Park. She is the granddaughter of Friedrich and Margaret Lampl of Velden, Austria and the late Scott and Alice Walker of Blackburn, England.

The bride chose a gown of understated elegance and sophistication from leading couture designer Phillipa Lepley of London. Its silk satin form was delicately overlaid with French lace and exquisitely embellished with hand-sewn crystals. The bridal bouquet was an ethereal, teardrop-shaped, wired display of lilies of the valley, white spray roses, cream estonia and simple seasonal foliage.

The bride was given in marriage by her parents. She was escorted down the aisle by her father. Her charming bridesmaids were her cousins Katie and Stephanie Lampl of London. Her longtime friend from Dallas, Tricia Laing, who now makes her home in London, attended the bride and provided invaluable assistance with the bride’s gown. Also in attendance were Christy Cowart and Kristy Ellis, great friends of the bride, who had made the long trip from Dallas to London to support her.

The formidable groomsmen were James McEwan and Kumar Iyer, whose speeches entertained and moved in equal measure. The hardworking ushers included Shub Banerjee, Fred Walsh, Justin Williams, Charles Armstrong, Rupert Gorman and Chris Lampl. They provided the usual duties at the church but offered even more en route to the reception, serving the finest champagne and snacks to the guests, who were transported to the reception on double-decker London buses.

The bride is a graduate of the Hockaday School. She received a Bachelor of Arts in public affairs and corporate communications from SMU. She received a Master of Science in speech and language therapy from the Callier Center at the University of Texas. She is a speech therapist for the National Health Service in London.

The groom is a graduate of Downside School in Somerset UK. He studied English literature and Latin at Durham University, and went on to receive a Postgraduate Diploma in Law from Nottingham University. The groom is a criminal barrister working in the Middle Temple of The City of London.

Following their wedding trip to Four Seasons Resort, Nevis, a luxurious Caribbean island resort, the couple are at home in Battersea, London. 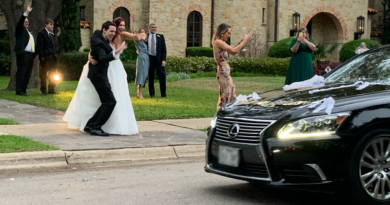 Love In The Time Of Social Distancing 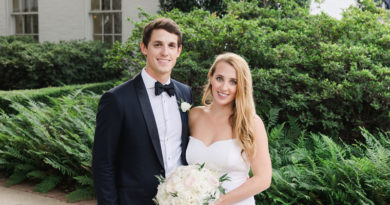