A couple of weeks ago, I wrote about how Dr. Richard Malouf’s contractors paid a visit to the city’s Board of Adjustment to add a second electrical meter to his 30,000-square-foot Strait Lane estate, and private water park.

Last week, Malouf’s business All Smiles Dental Center (well, now he’s a minority share holder after selling most of it in 2010) filed for bankruptcy. WFFA reports that in the Chapter 11 filings, the dental center lists $50 to $100 million in liabilities, and $1 to $10 million in assets.

The business was known for putting braces on people using Medicaid, and within the past several months, they have shrunk from 10 Dallas locations, to only a handful. Michael Lozich, spokesman for All Smiles, said they plan to cut the orthodontics portion of their practice within the next 90 days, and hope to emerge out of bankruptcy later this year.

Since the bankruptcy is strictly business, the Malouf Manion will go untouched, and construction is pressing on. I’m hoping he puts one of these in his backyard and invites me over. 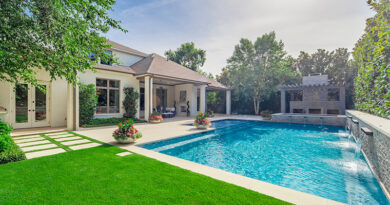