Employees of Lambert Landscape Co. dug into the frozen tundra of Armstrong Parkway last weekend to plant a tree in honor of Highland Park’s centennial.

The live oak, which Lambert’s donated and planted at the corner of Armstrong and Douglas Avenue, replaced a tree that Ronnie Brown, the director of town services, believes was planted by Edgar Flippen and Hugh Prather in Highland Park’s earliest days.

“It had been in decline for a couple of years, but it finally got to the point where it was a safety hazard,” Brown said during today’s planting ceremony. “It was big enough that you and I couldn’t reach around it.”

Brown said other groups, including a garden club, had approached the town about planting at the site, but their proposed trees were just too small to fit in with the other “legacy” trees along Armstrong at Preston Road and Arcady Avenue.

“We really wanted it to be something significant — not a 2-inch caliper,” Brown said. “So Lambert’s agreed to step up and do this. That was good. It was a good fit.”

Pierce Allman, chairman of the Highland Park Centennial Committee, said Lambert’s plans to also donate live oaks to the town’s elementary schools. The hope is that those trees, as well as the one at Armstrong and Douglas, will still be standing tall when the town’s bicentennial rolls around.

“As long as somebody takes care of it and the weather doesn’t get it, it’ll be here,” said Wayne Hitt, an arborist with Moore Tree Care, a Lambert’s subsidiary.

Auto/Pedestrian Accident at Mockingbird and Abbott 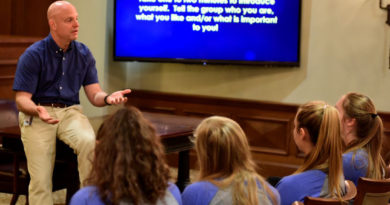