For Orion Salters, the decision to play college football at Iowa State came down to loyalty.

The Jesuit senior said ISU was one of the first Division I schools to show interest in offering him a scholarship after his standout junior season with the Rangers.

After an injury caused him to have offseason shoulder surgery a few months later, ISU was one of the few schools left in the mix.

So Salters made it official by verbally committing to play for the Cyclones next season. Verbal commitments are non-binding, and Salters will be able to sign a letter of intent on Feb. 5.

This season, Salters rushed for 625 yards and 10 touchdowns, and also tallied 587 yards receiving and six touchdowns, as the Rangers reached the Class 5A Region II semifinals for the first time.

Salters also returned kicks this year for Jesuit after playing cornerback as a sophomore and playing both offense and defense during his junior year.

“He’s been a very versatile player for us,” said Jesuit head coach Brandon Hickman. “He was a big part of us making a deep playoff run.”

At Iowa State, Salters will join his former Jesuit teammate, J.D. Waggoner, who is a redshirt freshman defensive end for the Cyclones. Former Jesuit lineman Reggie Stephens also played for Iowa State before being drafted by the Cincinnati Bengals in 2010.

“I knew J.D. was going there, and he told me how great of a place it was,” said Salters, who lives in the Kessler Park area of Oak Cliff.

At 5-foot-10 and 165 pounds, the speedy Salters said he was recruited as an athlete capable of playing multiple positions for the Cyclones. He is expected to play mostly slot receiver in the team’s spread offense under new offensive coordinator Mark Mangino, a former head coach at Kansas.

He also was lured by the opportunity to play in the same conference with schools such as Texas, Baylor, TCU and Oklahoma, meaning his family and friends will have several chances to see him play.

After recently taking an official visit to the campus in Ames, Iowa, Salters braved the 10-degree temperatures and became more convinced that his decision felt right.

“The cold is something you’ve got to get used to,” he said. “I loved it up there. It’s real homey. It was more than I expected.” 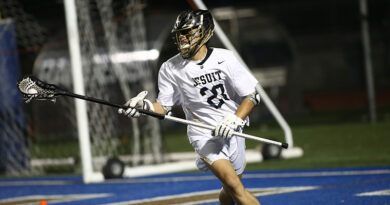