You could forgive Danny Leland if he chose the Baylor track and field program solely based on its tradition, which includes a handful of Olympic gold medalists like Michael Johnson and Jeremy Wariner.

That’s important for sure, yet the Highland Park High School senior found a more personal connection that prompted him to run with the Bears over other major programs.

“There was something about Baylor that struck me,” said Leland, a decorated middle-distance runner for the Scots. “They’ve got a proven track record with their athletes, but it seemed like they really cared about me as a person.”

Leland was one of several HP athletes recognized during a ceremony Wednesday for signing or committing to college athletic programs during the spring semester.

Leland’s teammate, Pearson Feagans, signed with Villanova, where he might compete in both sprints and jumping events. He’s won three district titles with the Scots, including this year in the triple jump. He also placed third in that event at the Texas Relays.

“It’s a great school with a great track program,” Feagans said. “Villanova was the only school I visited, and I committed. It was pretty random. It’s weird how things work out sometimes.”

On the girls side, Gabby Crank will be reunited on the track team at the University of Texas with former HP standout Mary Beth Hamilton. The duo ran together on a 4×200 relay team at the 2013 state meet.

“I’m excited to run with Mary Beth again,” said Crank, who will be a preferred walk-on with the Longhorns and will enter the school’s business honors program. “Having a great teammate that I know already, and a lot of other friends who go there and love it, was definitely a factor.”

Crank already has been to the state meet three times, winning two medals, and set the school record earlier this year in the triple jump. She also is a two-time state champion in cross country.

In football, HP receiver Andrew Frost was able to commit to Air Force, where he’ll join teammate Nick Waterman. After signing day in February, Falcons coaches called Frost and offered him a spot after some shuffling left an opening on the roster.

“They thought I would be a good fir for them,” Frost said. “It’s a hard school, but I’m ready for the challenge. I can’t think of a better thing to do than serve our country.”

Lauren Titus, who stars for the HP girls lacrosse club team, will play as a walk-on at American University in Washington, D.C. American head coach Emma Wallace played under HP head coach Lellie Swords when Swords was a coach at Johns Hopkins in nearby Baltimore.

Two HP rowers also were recognized on Wednesday, as coxswain Lauren Hansford will attend Boston College while Ben Boccara is headed to Columbia. Both compete for the Dallas United Crew club team.

Two other athletes also were part of the celebration, including golfer Reid Alexander (Sewanee) and tennis player Cooper Chimbel (Hendrix). 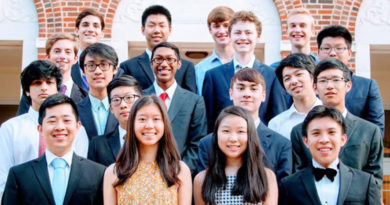 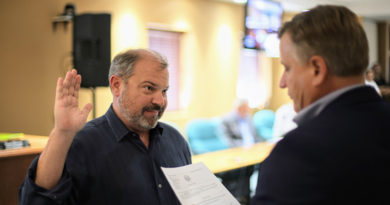 One thought on “HP Track Stars Making Jump to College”