Edwin Flores and Kyle Renard are both vying for Elizabeth Jones’ District 1 seat on the Dallas ISD school board. Both come from a medical background and have various school-board experiences, but the two Republicans can still see certain issues their own way.

Renard is an SMU graduate, a pediatrician, and mother of three. Two of her children attended DISD’s School for the Talented and Gifted, or TAG. She sits on the Dallas County Schools board.

“Serving on the county school board has been a great experience in getting my feet wet and conveying constituent desires to administration, and helping intervene for them and get solutions,” she said.

WHAT: Election Day
WHEN: Saturday, May 9
WHERE: Check dallascountyvotes.org to find your polling place.

Her opponent has previously held the exact seat they now compete for. Edwin Flores filled the spot from 2005-2012. The father of two and Mexico City native has a Ph.D in molecular immunobiology and a law degree and now works in biotechnical patents. His children attended DISD schools as well.

“I use science every day. I have the skill set to say, ‘If we had modified these inputs, our output would be different,’” he said.

Both candidates are strong supporters of expanding dual-language programs such as that at Withers Elementary. But on other issues, they see things a bit differently.

“Nationally, people are looking at Dallas as a place where great reforms have been taking place and are excited to see the results of those reforms, including the principal evaluation and now the teacher evaluation and the incentive pay that goes with it,” Flores said.

His opponent doesn’t place as much value in the concept of incentive pay.

“Most teachers are not motivated by money,” Renard said. “It’s not the financial incentive so much that rings their bell. They are very committed to the children and to seeing these kids succeed.”

“I love what Elizabeth Jones does right now,” she said. “At the beginning of the board meeting … she always applauds everything going on in her district that she knows about. She gives them the accolades for what they’re doing.”

Following a final round of forums and appearances, the candidates will eagerly await the results of their work on May 9. 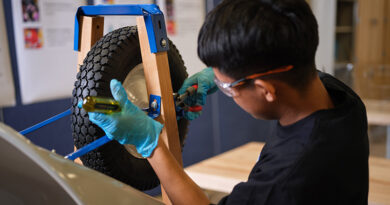