The golfer with the largest galleries at the Byron Nelson Championship wasn’t anywhere to be found on the final leaderboard.

That golfer, of course, is Jordan Spieth, whose weekend at his hometown PGA Tour event might have been somewhat frustrating in terms of results, even though his enthusiastic supporters didn’t seem to mind.

“It was really cool walking these fairways, walking up to the greens, seeing these huge galleries that were supporting,” Spieth said. “This is a special week for me, and it lived up to it this year. I’ve improved from the last couple years as a professional. If I can continue to do so, maybe I’ll have a chance to win one of these.”

The Preston Hollow native and former Jesuit standout handled all the attention with poise and good spirits, smiling to fans between holes and signing plenty of autographs from a youth clinic until the final putt.

“It’s odd because a lot of the time I see my friends and family out here, and I just want to go hang out with them, and obviously I need to stay focused,” Spieth said. “But it’s definitely a comfortable feeling seeing people that I know. It doesn’t go unnoticed, even though sometimes I’ll just walk right through the ropes and on to the next hole.”

The popularity of Spieth, of course, has surged since his runaway victory at the Masters in April that placed him atop the tour’s points standings. By his standards, Spieth’s performance was mediocre at the Nelson. He finished in a tie for 30th place and only had one standout round, when he tallied seven birdies and carded a 5-under par 64 on Friday. He wound up 11 shots behind champion Steven Bowditch.

The 21-year-old phenom has played the tournament at the TPC Four Seasons more than any other in his career. Yet in five appearances, he has never placed better than 16th, and that was in his debut at age 16 in 2010.

Spieth has come a long way since then, but he’ll never forget that debut and the impact it’s had on his career in the ensuing five years.

“It’s cool being on that 10th tee box and remembering the first shot that I ever hit in a professional tournament,” Spieth said. “That tournament allowed me to realize that I can do this, that I can eventually come out here and play professional golf, do it for a living and thoroughly enjoy it. I was able to see how much time and effort they put into it. So at an early age, I was able to experience that, which helped me and made every other tournament seem a little bit easier.”

Jesuit’s Not Playing Around With iPad Plan 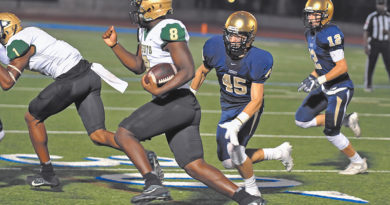