Skulduggery of the week: Crash And Burned

At 8:59 p.m. on Aug. 7, the driver of a gray 2008 Mazda 323 fled after colliding with a parked black 2008 Mazda 323 in the 4700 block of Abbott Avenue. The accident damaged both cars extensively. By the time the owner of the black Mazda got to the scene after hearing the crash, the driver was gone but the gray car was still running. An officer found a driver’s license on the floor and an iPhone in the console, which he answered when it rang. The teenage caller sounded confused and later hung up when asked for his name. Then the teen’s stepfather called and relayed a story from his stepson that didn’t make much sense about the car being borrowed while he was at a club with friends. The following morning, the friends and their parents came to the Highland Park Department of Public Safety to file a stolen vehicle report, but later decided against that once additional evidence revealed the truth behind what likely happened. At 9:23 p.m., Rio Raymond Alcorta, 18, of University Park was arrested in the 4900 block of Abbott on a charge of public intoxication by a minor.

3 MONDAY
At 2 a.m., Stephen Curran III, 58, of Highland Park was arrested in the 4500 block of Abbott Avenue on an assault charge.

5 WEDNESDAY
At 1:30 a.m., Jose Antonio Gutierrez-Mejia, 21, of Dallas was arrested in the 4400 block of Preston Road on a charge of possession of drug paraphernalia.

6 THURSDAY
At 6:15 p.m., a teenager was scratched on the leg by a cat while walking a dog in the 3900 block of Euclid Avenue. The dog-walker was scuffed up while trying to break up a fight between the two pets after the cat jumped out from underneath some shrubbery. The victim was taken to Parkland Hospital with minor injuries.

At 6:45 p.m., Justin Mark Kuzski, 26, of Flower Mound was arrested following a traffic stop in the 5500 block of Preston Roadon a charge of possession of a controlled substance.

8 SATURDAY
At 1:33 p.m., police found a small bag of marijuana on the ground in the sally port at Highland Park Town Hall, in an area where prisoners are routinely transferred from squad cars to the police holding facility.

At 3:10 p.m., a swindler tried to cash a fraudulent check at Compass Bank in the 6500 block of Hillcrest Avenue. Mykechia Datronique Presha, 20, of Dallas was arrested on a forgery charge. 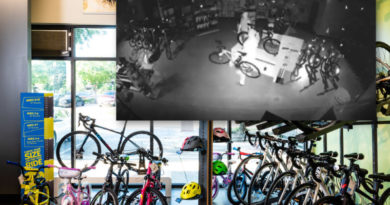