Before Aug. 6, 1945, Clara Haden White, then 18, prepared to travel to Denton to start her junior year of college at Texas State College for Women.

Edward White, 19, stationed in Austria after completing combat service in Europe, trained with other GIs to invade the Japanese mainland.

Three years later, at Fondren Library on the SMU campus, Edward met Clara, or “Claire,” a reference librarian. Edward, decorated twice with the Bronze Star for heroism during combat in Europe, was a 1943 Highland Park graduate who’d enrolled in SMU after returning from Europe in 1946. Their relationship wound up lasting more than a half-century.

Claire, a former longtime librarian at Bradfield Elementary School, died in July at age 88 at her home in Amarillo.

On their first date in 1948, Claire and Edward went to a football game to watch Heisman Trophy hopeful Doak Walker.

They courted at SMU and on the Texas coast while Edward attended medical school in Galveston and Claire managed the Del Mar College library in Corpus Christi as head librarian.

Edward graduated from UT’s medical school in Galveston in 1953. Claire commuted to work as a school librarian in Texas City schools across Galveston Bay to help pay for Edward’s training.

Edward became a Dallas urologist and surgeon; Claire became a full-time homemaker after the 1955 birth of their first child of three. The couple returned to Dallas in 1958, when Edward started his urology residency at Parkland Hospital. He began a solo practice in 1961.

Toward the end of 1964, Edward moved his family from north Dallas to University Park to take advantage of area schools, including Bradfield in Highland Park, where he’d grown up.

Edward suffered a heart attack in 1975; Claire returned to school in 1976 to work on a master’s in library science at Texas Woman’s University. Resuming her library career in Irving in 1977, Claire earned a master’s degree in 1980 at age 53; she was elected to Beta Phi Mu, the library science honor society.

Claire retired from Bradfield in 1992; she next served as chapter president of her professional education honor society — Delta Kappa Gamma.

Edward, 73, died Aug. 1, 1999, at their home in Highland Park. Dallas Cowboys coach Tom Landry attended Edward’s memorial service at Park Cities Baptist Church. Claire had been a member there since 1958, and Edward became an acquaintance of Coach Landry when they both served on the Fellowship of Christian Athletes board during the 1990s.

Claire moved from Dallas in November 2002 to Amarillo to be near family. She taught reading to local children enrolled in America’s Promise, an organization founded by Colin Powell.

HPISD Announces Yet Another Retirement 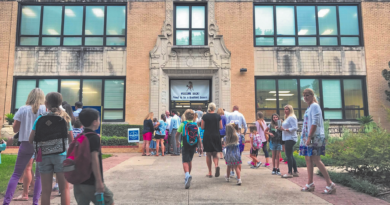