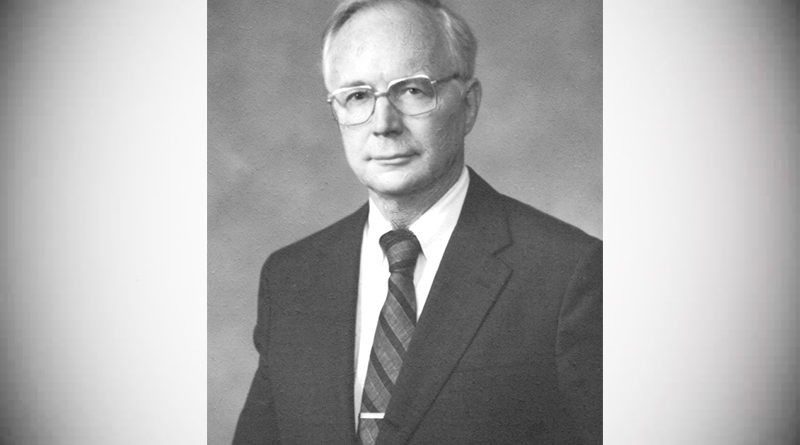 He was born in Sherman, Texas on Sept. 16, 1926 to the marriage of James Ralph Wood and Kathleen Cook. The family shortly moved to Dallas, and Wood graduated from its public schools. In 1943 he entered the junior college of the New Mexico Military Institute, but left after one year to serve in the U. S. Navy for the remainder of World War II. Upon honorable discharge he entered Southern Methodist University where he obtained a BA degree in 1949. He then entered the law school at the University of Texas, receiving his LLB degree in 1951. He was a member of Phi Delta Theta and government honorary Pi Sigma Alpha.

Wood engaged in the active practice of law for 40 years, first as a member of the firm Scurry, Scurry, Pace & Wood, then with the Law Department of Southwestern Life Insurance Company where he became Vice President & Special Counsel. Upon early retirement from Southwestern Life, he joined Great American Reserve Insurance Company as Vice President & General Counsel, serving until final retirement in July, 1991. During his active years in the practice of law, Wood was a member of the State Bar of Texas, a Life Senior Fellow of the Dallas Bar Foundation, and the Legal Section of the American Council of Life Insurance. He was a past chairman of the Corporate Counsel Section of the Texas Bar, the Legislative Committee of the Texas Life Insurance Association, and the New Mexico Life Insurance Guaranty Association. In addition he served as Chairman of the Board of the Visiting Nurse Association of Dallas and the VNA Foundation and was a trustee of Grace Presbyterian Village. He was a past member of the Idlewild, Terpsechorean and Calyx clubs.

Wood served at Highland Park Presbyterian Church as Sunday School teacher, Deacon, Elder and trustee. He was a volunteer in a number of civic and charitable organizations and especially enjoyed a LIFT service of teaching English and reading to inmates at the Dallas County Jail.

A memorial service will be held at Highland Park Presbyterian Church, 3821 University Blvd., on Wednesday, Oct. 14 at 3:30 p.m.

The family suggests that memorial contributions be made to the Visiting Nurse Association, 1600 Viceroy Dr, Dallas, TX 75235, the Highland Park Presbyterian Church, 3821 University Blvd., Dallas, TX 75205 or to the charity of the donors choice.