After months of negotiations, the Highland Park Independent School District Board of Trustees brought their revised proposal for the building site of a fifth elementary school to the Dallas City Plan Commission Thursday in a petition to rezone the property.

The proposal was approved unanimously, despite several persistent concerns from the community and doubts from the city of Dallas. The hearing, formerly set for April 21, had been delayed until now due to complications regarding the building site and school design – matters that have been the cause of some controversy within the Park Cities.

But Dallas was adamant that the hearing was not a platform for a neighborhood quarrel. Commissioners were forced at various points during the hearing to stress that the sole purpose of their body was land use; specifically, Dallas land use.

“You’re free to say whatever you’d like … but items about the bond, and I appreciate the data, but we’re not here to decide whether another school should be built, or capacity, or any kind of educational issues,” Bobby Abtahi, vice chair of the Dallas CPC, told a nearly full room, in anticipation of a lengthy round of commentary from both sides.

Park Cities residents, famous for their community involvement, have been vocal in the run-up to their first challenged school board election in five years. The building of a fifth elementary school is part-and-parcel with this election, since the $361 million bond package Abtahi referred to has both allowed for the new school to be built and become a battle cry for ousting board members and replacing them with a new slate of candidates.

The property, a buy from Northway Christian Church on the southwest corner of Northwest Highway and Durham Street, has what Jonathan Aldis of Stantec, the architecture firm hired by the board, called a “very challenging grade situation with a little over 19 feet of fall.” That’s from the northwest corner to the southeast corner of the lot. In addition to the awkward slope, another quirk of the property is the 204-foot setback mandated by the church in their contract with the board, which Aldis said effectively takes out 1.3 acres of the already limited 4.3-acre lot.

At the May 5 hearing, both opposition and supporters brought a variety of discussion topics to the table, ranging from serious concerns about traffic management, to quips from neighbors about the building blocking out the sun and killing their lawns, to warnings that the property is the perfect place for an ISIS attack.

These aside, the CPC challenged HPISD and their representatives, Aldis from Stantec and Dallas Cothrum from Masterplan, on concerns similar to what factions of the opposition have been saying for months.

“The basic problem with this case is that the site is too small,” commissioner Michael Jung said.

Which is a primary complaint of the Caruth Hills neighborhood association, represented at the hearing mainly by neighbors within 200 or 500 feet of the school. “This is a massive building, a massive building on a small site,” said Daniel Kearns, an active member of the association.

Kearns, along with other Caruth Hills neighbors, has been meeting weekly with commissioner Margot Murphy in negotiating building plan revisions with the board. With something of an insider’s look, he predicted last month that the April hearing would be delayed. He also believed that building in Dallas would lead HPISD into difficulties.

He and many in the opposition see the size and sheer mass of the school as an insurmountable problem, one that requires that the board and their architects go back to the drawing board. This is something the board believes to be impossible, since it would mean setting back their construction schedule at what they’ve estimated to be a $5 million cost to taxpayers, according to HPISD communications director Jon Dahlander.

(If the new school is not completed and ready to open by next summer, Dahlander said the delay will cause a domino effect: none of the other three schools being rebuilt under the bond package will go under construction on schedule, since while each school is being rebuilt, its students will need to be displaced to the new school.)

This argument does not impress the opposition. Rather, it raises the question of why, if delaying construction will cost taxpayers, the board set itself impossible deadlines.

“This is an aggressive, aggressive construction schedule,” Kearns said.

Time constraints earned HPISD no points with the CPC either. Nor did any of the board’s main reasoning behind building the fifth elementary school: that Highland Park schools are overcrowded and their capacity cannot meet a growing enrollment; or that Highland Park is landlocked and the board wanted to avoid employing eminent domain.

“When I’m told that the district promised the HPISD bond package, that carries very little weight with me. If HPISD promised something in the city of Dallas that it turns out it can’t deliver, then that is not the city of Dallas’ problem,” Jung said in his final comments before voting.

But while the CPC agreed with the opposition on certain points, they were ultimately swayed by the extent of work that had gone into the proposal and several heavy concessions the board made in order to appease neighbors, which included adjusting the setback of the school from the streets; restricting use of the athletic field and eliminating floodlights; and lowering buildings, including the library, to meet with Dallas’ residential proximity slope (RPS) guidelines and with neighbors’ demands.

“The concessions that have been made by HPISD utterly convince me that they are acting in good faith in this matter, and I think the aesthetics of the school are something most of us would die for in our district,” Jung said, in a sudden turn around.

But some of the opposition remained unmoved by the board’s gestures, saying that their concession was living with the building in the first place.

Ultimately, having been convinced of the good faith on both sides, the CPC’s decision came down to several hard numbers, primarily building height and setback.

Murphy’s motion to approve the rezoning was contingent on certain restrictions, including a minimum setback of 30 feet from side yards, a maximum lot coverage of 35 percent, and a maximum structure height of 40 feet, excepting a few minor allowances.

According to Aldis, under revised building plans, the school will have a height of 39 feet 8 inches high (which makes a visual height of 44 feet).

While certain areas remain outside of RPS, Jung argued that, “in this case, the deviations from RPS are not significant.”

Abtahi pointed out that, “though this might not be a perfect proposal,” the entire RPS discussion was only possible because HPISD had made the decision to file their zoning request as a Planned Development District, rather than a Special Use Permit, which would have given Dallas no control over height beyond what is “consistent with federal aviation administration and building code,” according to city planner Sarah May.

“So, as long as an airplane wouldn’t hit it,” Abtahi clarified, as if to say, it could be worse.

Although Kearns remains unhappy with the plans, he said he was not surprised by the result. Having worked with the board and with Murphy since the unveiling of the plans, he had fully expected the board’s proposal to be approved.

He was right about one other thing: building a school in Dallas has proved tricky for Highland Park. Because it’s an intersection of two jurisdictions, each with separate concerns, the planning of the building has revolved around a tangle of separate but intersecting issues. The board cares about the students. The neighbors care about their neighborhood. And Dallas cares about Dallas.

So, a unanimous zoning approval sounds like a big win for the board, and it is: but it has also left all parties at somewhat of a loss. The Wentwood Avenue neighbors – those directly across from the street, who are unanimously opposed – still feel the height and mass of the building have not been adequately addressed, whereas the board has made concessions to a point that some supporters feel has been detrimental to the operation of the school.

The CPC expressed several big concerns before ultimately casting their votes. In addition to the size of the building and the setback restrictions placed on the property by the church, some felt that the Wentwood neighbors weren’t consulted enough, or early enough.

HPISD Superintendent Dr. Tom Trigg admitted as much. “I have to be honest and say that group [a focus group held in February that included Wentwood neighbors] met after the design was very, very far along,” he said.

In his closing remarks, Abtahi told Trigg, “The buck doesn’t stop with us. There’s still time to reach out to them [the seven homes on Wentwood] between now and the time it [the proposal] goes to council, so I think that would be a good idea.”

According to a press release sent out today from HPISD, Dallas City Council may be considering the zoning request by the end of the month. “If approved,” HPISD stated, “construction will begin this summer with a planned opening for the school in August 2017.”

Meet the School Board Candidates 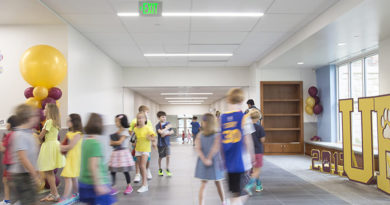 One thought on “HPISD, Dallas Move Forward on New School, But Can Everyone Live With It?”