Just as they did a year ago, Highland Park and Jesuit have plenty in common on paper.

They share identical records, cruised through their respective district schedules, and boast deep pitching staffs that are built for postseason success.

So their Class 6A Region II quarterfinal playoff series would be a great matchup even without the rivalry aspect that comes from being located just a few miles apart along the Dallas North Tollway.

It would also be a great matchup without the revenge factor for the Scots after being swept in the same round during Jesuit’s run to the state tournament last spring — which also happened to be HP’s fourth straight postseason exit in the regional quarterfinals.

Yet all of those factors will be in the mix when the best-of-three series opens at 7:30 p.m. today at Scotland Yard. The series shifts to Jesuit’s Wright Field for Game 2 at 7:30 p.m. on Friday, and will conclude with a third game, if necessary, at noon Saturday in Prosper.

The Scots (29-6) and Rangers (29-6) each have been tested thus far in the playoffs. HP dropped its bi-district opener against Irving MacArthur before rallying to take the series, while the same thing happened to Jesuit last weekend against Belton in the area round.

The Scots swept Rowlett in the area round last weekend, and the Rangers cruised past North Mesquite in bi-district action.

Pitching is the clear strength on both sides, so a low-scoring series would be the obvious expectation. Jesuit has lefthanders Kyle Muller and Jacob Palisch (both are top recruits) along with J.J. Montenegro. HP can counter with William Adair, Sawyer Lake, and Grant Howell.

The Scots defeated the Rangers in boys basketball this season, while Jesuit upset HP to claim the state lacrosse title earlier this month.

On the diamond, however, it’s a rematch that both sets of players and fans have anticipated probably since last May. And the next few days will give each side a chance to show why. 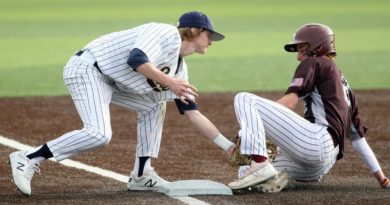