PROSPER — With the season on the line, the unlikeliest combination of players that propelled Jesuit past Highland Park on Saturday.

Jesuit, which eliminated the Scots in the third round for the second straight year, advances to face another rematch against Conroe Oak Ridge in the regional semifinals next weekend.

“Until today, I pitched three games in relief and that was in district,” said VanKirk. “I was very nervous, but I calmed down after they hit into that double play in the first inning.”

Two of Guzman’s hits were deep doubles, the first one driving a run to give Jesuit (31-7) a 1-0 lead in the top of the fourth inning.

The Scots (30-8) answered in the bottom half of the frame when Kage Forrest drove in two runs with a bases-loaded single, giving HP a 2-1 lead. VanKirk then had to deal with runners on first and third with no outs, but pitched his way out of the inning.

“We can’t just score two runs and sit on it,” said HP head coach Travis Yoder. “With runners on and no outs, we have to capitalize, and today we didn’t.”

Jesuit’s Pete Hamrick made them pay in the next inning. The senior first baseman hit a two-out RBI single to even the score at 2-2.

While the Rangers are still alive in their quest to return to the state tournament, HP suffered its fifth consecutive defeat in the regional quarterfinal round.

The Scots will return to Class 5A next season, which means there won’t be any more renewals of the rivalry series in the playoffs anytime soon.

“These are two very evenly matched teams,” said Jesuit head coach Brian Jones. “We can’t take anything away from Highland Park. It was a great series.”

Guzman’s second double came in the top of the sixth inning, and his drive to deep center field was almost snagged by a diving Sawyer Lake. Instead, it drove in what turned out to be the game-winning run.

“The question in this series was how long the starting pitcher could last for both teams,” Jones said. “VanKirk really pulled through for us today.”

Stanford commit Jacob Palisch was called on to protect the 3-2 lead in the last inning, and he picked up right where he left off in a no-hitter in Game 1 on Thursday. After the junior struck out the side for the save, the celebration began.

“We feel confident that we can always go the next guy,” Palisch said about VanKirk. “He doesn’t know how good he actually is, but I think he does now.” 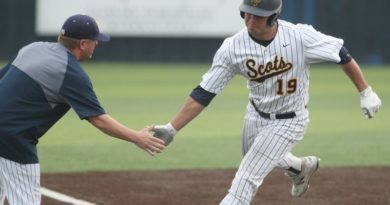