For the past 15 years, a group of seven to 10 women has set up in front of John and Dawna Walsh’s home along the annual Park Cities Fourth of July parade route. With banjos, cellos, and guitars in hand, they play to entertain with classic patriotic tunes, food, and camaraderie.

Ye Merrie Olde Players was formed in 1987 when Brownie Shytles became jealous of her son’s rock and roll band.

“I wanted something of my own,” Shytles said. “So I called Sarah [Chalk] and she started recruiting.”

The players’ first gig was at a house on the Kappa Kappa Gamma Christmas Tour of Homes. In 1989, the group began performing regularly for audiences across Dallas in venues such as the Dallas Woman’s Club, the Dallas Arboretum, the Letot Center, and countless churches.

“These women are so connected to the community,” said Kathy Jonas, longtime friend of the players. “Before they played the Fourth of July parade at the Walshes’, they played at my house on University [Boulevard]. They are all such talented, fun ladies.”

The members of the group are very versatile. Besides the conventional piano, accordion, and violin, their arrangements have also featured whistles, sirens, duck callers, maracas, cowbells, and even a jingling shaker made from goat nails.

The group’s name came from a lighthearted brainstorming session among the ladies. But it has undergone a few changes throughout the years.

“We usually drop the ‘Ye’ from our name because it does trip people up,” said cellist Betty Jo Taylor Cox. “Most people just call us the ‘Merrie Olde Players,’ but we’ve been called by mistake the ‘Merrie Maids,’ and by mistake, of course, the ‘Very Olde Players.’”

The women, some approaching 80 years old, have created more than 20 different programs, put on more than 600 performances, and practiced on Monday afternoons in Chalk’s living room for the past 25 years.

Shytles and Chalk compiled most of the group’s musical selections from more than 35 books. The group offers programs from Broadway to country-western to Latin, with many other genres in between.

They perform original programs too. “Meet me in Dallas,” which tells the story of Dallas through various musical numbers, is among the group’s favorites. According to Chalk, Cox would spend time at the library copying old sheet music for songs about the city and writing a script based on the history of Dallas. It turned out to be one of their most popular programs.

Despite their years, their memories do not fail them as they recall story after story. Whether it was the time they were playing near a swarm of wasps, or the time Ogden, a registered nurse, abandoned her music to help revive a woman who fainted during their George Gershwin program. (The show certainly went on, Chalk said.)

The group has had plenty of recognition, from a tree planted in their honor at the East Texas Arboretum in Athens, to a brick with their name on it in Fair Park.

While the group is officially retired, the women still do a few big events, including the annual Dallas Woman’s Club Mother/Daughter Tea, Hockaday’s Valentine’s Sweetheart Tea, and of course, the parade.

“We look forward to this year’s Fourth of July parade,” Loftis said. “We love this tradition and how it brings the community together.” 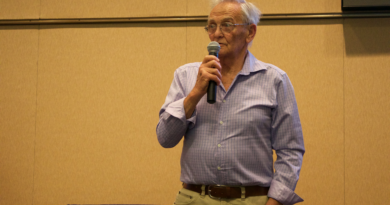 German-born Karl Kuby Sr. Proud to Be An American, Looking Forward to Parade 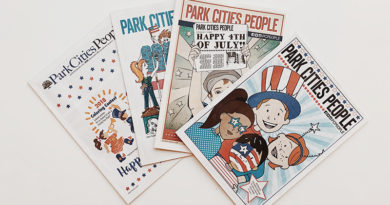 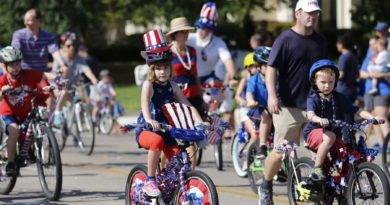