After shuttering in 2014, the space was leased to Project Pie. But when the pizza chain pulled out in 2016, Harkness was once again looking for someone to take over the location.

Kelley grew up with Harkness’s son, and ate at New York Sub “nonstop.” So it was only natural that he resurrect an institution of which he had such fond memories.

According to Kelley, the opportunity fell into his lap. The process started with a phone call between Kelley and Harkness the day before Thanksgiving last November. When Harkness inquired if Kelley knew anyone who wanted to fill the spot, Kelley decided he had found his next project.

After leaving Dallas at age 18 to attend culinary school in Chicago, he returned more than a decade later and has worked with several restaurants in the area, including TJ’s Seafood, the Ivy Tavern, and eatZi’s Market & Bakery.

“It’s not a franchise,” Kelley said. “It’s just something that I love, and since Ken and I are such good friends, it was kind of, ‘Can I use your brand and make it mine?’”

Those who grew up eating at New York Sub will find the classic sandwiches Harkness served. According to Kelley, the menu will remain the same, but the quality will be different. After working for Whole Foods for six years, Kelley is committed to serving food with all-natural ingredients.

“But things that people rely on, like the sauce, the white bread recipe, it’ll still be the same,” he insisted. “Just made fresh daily.”

While patrons may notice a few differences in the actual restaurant, Kelley wanted to keep some of the original details, from the old menu boards to the mural on the exterior of the building, which was touched up to include images of people in his life.

“I hate when people take things and tear it down,” he said. “I grew up here. I didn’t want to see that awesome light sign go away. It would be sad, like if Bubba’s went away, or Burger House. They’re just kind of part of this town.”

So, how does Harkness feel seeing his 40-year legacy reopen in the spot where he started it all? According to Kelley, Harkness said in his thick Jersey accent: “I’m as happy as a clam at high tide.” 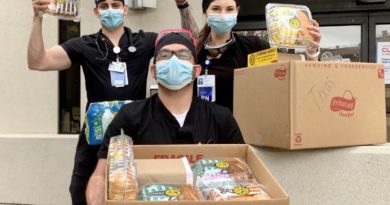