Northaven United Methodist Church pastor Eric Folkerth spoke on behalf of a fellow pastor in North Dakota, calling the fight over whether the Dakota Access Pipeline should be built through sacred Native American land a “spiritual battle.”

“We must protect and care for the planet,” he said. “This is a question for those with privilege and power in the world.”

Warren has not responded directly to the protests in Dallas or the larger movement in North Dakota. At press time, he and Energy Transfer Partners had not responded to multiple requests for comment.

Before the group marched from Warren’s offices past his 8.7-acre estate on Park Lane, Yolanda Bluehorse, who organized the event, asked that participants say a prayer as they walked past his property.

“Say a prayer that somehow this man is touched and he remembers that here are all of us, and we will all be affected when his pipeline bursts.”

Several weeks earlier, the same protesters lined the sidewalk on the corner of Harwood Street and Woodall Rogers Freeway on Oct. 21 behind a large tin foil pipe reading “NO DAPL” in a peaceful four-hour stand-in outside the park the billionaire named after his son.

This came on the heels of Energy Transfer Partner’s decision to resume pipeline construction Oct. 11 after a federal injunction requiring the company to halt was overturned by a U.S. courts of appeals.

In addition to running through sacred sites and burial grounds of the Standing Rock Sioux Tribe, the pipeline runs near the Missouri River, a major water source for the tribe and for the region.

“This protest is on behalf of all that rely on the Missouri for drinking and irrigation,” Folkerth said.

In a memo Warren sent out to his employees during the construction halt in September, he insisted that “concerns about the pipeline’s impact on the local water supply are unfounded.”

On the day of the Dallas protests, Sunoco, the subsidiary of Energy Transfer Partners that will operate the Dakota Access Pipeline, had an oil pipeline spill that leaked 55,000 gallons of gasoline into a tributary of the Susquehanna River in Pennsylvania.

Due to the spill, the Pennsylvania Department of Environmental Protection advised Pennsylvania American Water to shut down their water intake from the contaminated plant. The company redirected their water supply to another plant and asked customers to restrict their non-essential water use for several days while they tested the water.

The timing was coincidental, but it is hardly the company’s first oil spill.

In June, Sunoco paid the U.S. Environmental Protection Agency $850,000 in a settlement after an oil leak in Texas and Oklahoma, according to Law360. The company has had to settle multiple multi-million dollar oil spill cases with state and federal agencies.

According to Reuters, Sunoco has had more than 200 leaks since 2010, and spills crude more often than any of its competitors.

“This [the Missouri River] is a major water source that distributes water to reservations,” Heather Alford, a protester and member of the Cherokee nation, said. “There’s got to be another way to do what needs to be done.”

The Dallas protesters represent a faction of a nationwide movement to support the Native American tribes who have congregated to peacefully protest in North Dakota.

In a memo sent to his employees and media, Warren urged that “any protests be undertaken in a peaceful and law-abiding manner.”

“This is about justice for the indigenous people of the Great Plains,” Folkerth told the crowd.

Warren said in a memo released in October that his company was in compliance with the National Historic Preservation Act and had “carefully considered the views of all potentially affected tribes that chose to participate in the consultative process prescribed by Congress.”

At press time, a protest was planned for Nov. 15 at the Earle Cabell Federal Building and Courthouse downtown, where the U.S. Army Corps of Engineers offices.

“The Army Corps of Engineers is our last card. They’re our last hope,” Bluehorse said. “This pipeline can get rerouted.”

These Fashionistas are Rolling 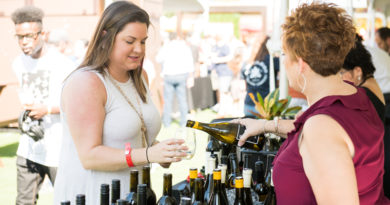