ARLINGTON — Until two weeks ago, Paxton Alexander was the third running back on Highland Park’s roster. Now he’s the backfield leader for a team that’s in the state championship game.

Alexander scored four touchdowns as the Scots upset previously unbeaten Denton Ryan 31-24 in a thriller on Saturday in the Class 5A Division I state semifinal at AT&T Stadium, pushing HP into its first title-game appearance since 2007. The Scots will meet Temple at noon on Dec. 17 at AT&T Stadium.

With leading rusher Jack Kozmetsky lost for the season with a broken arm suffered earlier in the playoffs, and backup Jacob Urbanczyk sustaining a broken collarbone in the first half on Saturday, the Scots turned to Alexander.

The diminutive junior responded with a clutch performance for the ages, rushing for 137 yards on 31 carries and catching a game-high six passes for 68 yards. His 2-yard scoring plunge with 7:24 remaining broke a 24-24 tie and proved to be the game-winner.

“He made yardage when there wasn’t any yardage to make,” said HP head coach Randy Allen. “He broke tackles, he caught the ball, and we gave it to him a lot. He just kept churning and making plays and scoring touchdowns.”

While Alexander stood out, there were other heroes for the Scots (13-2) against the bigger and more athletic Raiders (14-1).

“We have a lot of depth. Everybody’s ready, and everybody’s willing to step up,” Alexander said. “After he [Urbanczyk] went down, that really got my mind going. I knew I needed to be that guy. All those big guys up front led the way for me.”

The HP defense limited a potent Ryan offense to just 174 total yards — including only 51 yards rushing — and forced a pair of turnovers, the most critical of which was an interception by Zak Folts with 59 seconds remaining to stop a potential game-tying drive by the Raiders.

Ryan’s offense struggled for most of the game without starting quarterback Spencer Sanders, who was injured while scrambling in the second quarter and didn’t return. Sanders, a dual-threat junior who has verbally committed to Oklahoma State, was on crutches on the sideline for the second half. He finished with 26 passing yards and 12 rushing yards.

Meanwhile, HP quarterback John Stephen Jones showed poise against an aggressive Ryan defense. He completed 15 of 25 throws for 184 yards and two touchdowns, even though he lost a fumble. J.T. Dooley — another player whose role has increased because of injuries — caught five passes for 68 yards.

“We made some mistakes in the kicking game in the first half that gave them great field position,” Allen said. “But we’re resilient and our kids fought back. Great football teams find a way to get back in it.”

The Raiders capitalized on an early miscue by the Scots when Ryan’s Toby Burch forced a fumble, and teammate Dayton LeBlanc returned it 46 yards for the game’s first touchdown, putting the Raiders ahead 7-3.

The Scots came right back with a 69-yard drive that included a 32-yard scamper by Urbanczyk on his only carry of the game. Alexander’s 2-yard touchdown run put HP ahead 10-7.

Ryan tied the game on a field goal following a long punt return by Gabriel Douglas, then took a 17-10 lead after a blocked punt by Burch deep in HP territory. Tyreke Davis scored on a 1-yard run.

The Scots rallied again for a key touchdown just before halftime when Jones found a diving Alexander on a 3-yard pass in the end zone.

Alexander put HP in front 24-17 with an 11-yard run on the opening possession of the third quarter. Then Ryan responded with its biggest drive of the game, covering 84 yards in nine plays. Backup quarterback Jordan Rucker found Douglas on a critical 42-yard completion, then found Jimmy Love for a 20-yard score to knot the game at 24 midway through the third quarter.

The Ryan defense made another big play moments later, when Delano Robinson recovered an HP fumble on fourth down near midfield. But the Raiders couldn’t capitalize.

Instead, HP drove 82 yards in 11 plays to take a lead it never relinquished, then turned it over to the defense, which made two huge stops down the stretch. Turner Coxe recovered a fumble on a fake punt deep in Ryan territory, and although the Scots didn’t turn it into points, they forced Ryan into desperation mode without its field general.

Douglas caught six passes for 83 yards to lead Ryan, but Davis was limited to just 29 yards on 12 carries against an HP defense that was able to focus on the run with Sanders on the sidelines.

It will be the third appearance in the state championship game since 2005 for HP, which defeated Marshall in 2005 but lost to Lake Travis in 2007. The Scots also avenged a loss to Ryan in the 2003 state semifinals.

So Ryan will face Temple (12-3), which knocked off previously undefeated Richmond Foster 31-24 on Saturday. Allen admits this HP team won’t be like either of the previous squads he’s taken to the finals, in part because it’s dealt with more adversity.

“We haven’t had these kinds of injuries on other teams,” Allen said. “But we’ve got a 1-in-2 chance of winning it.” 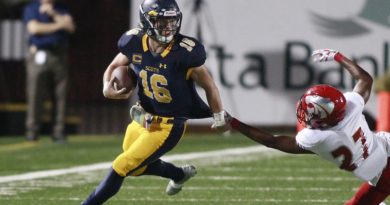 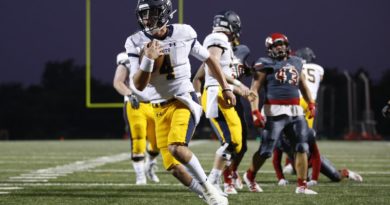