Highland Park’s dramatic victory over Temple in the Class 5A Division I state championship game in December earned Turner Coxe a ring. It might have also earned him a scholarship.

The HP defensive lineman earned defensive MVP honors during the Scots’ 16-7 win in the title game after his sack resulted in a safety in the fourth quarter. A couple of weeks later, SMU head coach Chad Morris was on the phone.

Coxe signed a letter of intent with the Mustangs on Wednesday. He was one of several HP athletes recognized during a National Signing Day ceremony at the school.

In addition to living near the campus, Coxe has several family members who earned degrees at SMU.

“To continue that legacy is really cool,” Coxe said. “Growing up, I remember going to a lot of games there and sitting on the grass.”

Coxe had a breakout season after battling injuries throughout his high school career. He missed three games with a sprained knee as a junior, and he sprained an ankle during a preseason scrimmage this year that kept him sidelined for two more games.

“He came on late in the playoffs to make so many big plays,” said HP head coach Randy Allen.

Gahm committed to Virginia prior to his senior season, and despite a big year that saw other schools become interested, he held firm on his commitment to the Cavaliers.

“Academics was the biggest factor,”Gahm said. “There were some schools who were very intriguing to me, but I wanted to stay where I committed. There was no chance I was going to flip.”

Blanton wanted to go to the U.S. Military Academy at West Point even before he was offered the chance to play football for the Black Knights. Former HP teammates Jack Sides and Boomer Bakich already are on the roster.

“It’s a dream come true,” Blanton said. “It’s an honor to be part of that elite group of people. Their work ethic is really admirable.”

At Georgia, Dooley will be a preferred walk-on at the school where his grandfather is the all-time leader in coaching victories. Plus, it’s the alma mater of star quarterback Matthew Stafford, who led HP to the 2005 state crown.

Vince Dooley amassed 201 wins from 1964-88 and remained as the school’s athletic director until 2004. J.T.’s father, Derek Dooley, is a Dallas Cowboys assistant and a former college coach at Tennessee.

J.T. Dooley played through a shoulder injury this season for HP and caught 31 passes for 457 yards and three touchdowns. He was a starter during the team’s playoff run.

“It’s kind of a home away from home,” said J.T., who still has family in Georgia. “It’s a place I’ve always loved.”

High jumper Falyn Reaugh signed with Oklahoma on Wednesday. She originally was committed to play volleyball at Clemson, where she planned to walk on to the track team.

However, a change of heart led her to refocus on track and field. She skipped her senior volleyball season at HP to focus on jumping.

“I’ve always loved track,” Reaugh said. “OU has a really great group of coaches, and I wanted to stay closer to home.”

Reaugh, a daughter of Dallas Stars broadcaster Daryl Reaugh, finished fourth in the high jump at the Class 6A state meet as a junior. 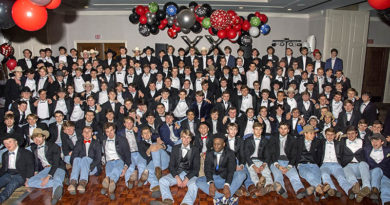 Luck, Be a Scots Senior Tonight!