WILLS POINT — After a few missed shots early in the game, Highland Park shook off the playoff jitters in a 59-34 win over Longview Pine Tree in a Class 5A Region II bi-district game on Monday.

The Lady Scots (23-8) bounced back from a loss in the regular season finale and will play state-ranked The Colony in the area round later this week at a time and site to be determined.

On Monday, there were a couple of obstacles that Highland Park had to overcome, some self-inflicted.

“We missed about seven layups or short shots in the first quarter,” said HP head coach Nicole Fleming. “Also, they were a more athletic team that it showed on film, and their zone was giving us trouble early.”

HP still led 11-6 after the first quarter, and had a 23-12 lead at halftime. Then the Lady Scots put the game away in the third quarter, when they outscored Pine Tree 21-12, led by Eve Loewe and Morgan Smith.

Smith finished with a game-high 22 points. Marissa Gary had a team-high 11 points for the Lady Pirates (18-12).

In the fourth quarter, Pine Tree momentarily cut the lead to 12 points, but HP finished the game from the free-throw line, with an 8-for-13 performance from the stripe in the final frame.

“It was good way to start the playoffs. We had some jitters but we got those out of the way,” Fleming said. “Sometimes it’s good to have things like that in the first game and your team learns from the experience.”

The Lady Scots were able to get 13 players playing time in the win, and seven scored at least two points.

“It’s good to get everyone into a playoff game, that’s valuable for young kids who are getting their first taste of this,” Fleming said.

Lady Scots Back in Action Tonight 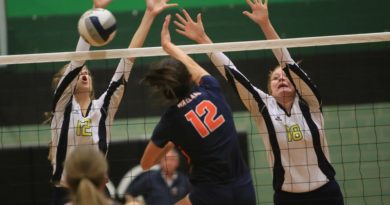