Patrick Shearer had a two-out RBI single and scored the go-ahead run in the bottom of the third inning as Highland Park opened its Class 5A Region II bi-district playoff series with a 4-1 win against Marshall on Friday at Scotland Yard.

“All season Patrick has come up with big two-out hits for us,” HP head coach Travis Yoder said. “He got our game going and that really was what swung us in the right direction.”

Game 2 is at 1 p.m. on Saturday in Marshall. Game 3, if necessary, will be 30 minutes after the conclusion of Game 2. In an odd quirk, HP will be the home team for the remainder of the series, as part of an agreement the coaches worked out since Marshall High School has prom on Saturday night and specifically asked to host on Saturday.

On Friday, Shearer helped the Scots (20-11) shake off a slow start and delivered a 2-1 lead in the bottom of the third inning on his single, followed by a double by Kage Forrest.

That momentum carried over, and the Scots added to their lead in the bottom of the fourth inning when Benner Page doubled and eventually scored on a wild pitch. Will Whitlock, a pinch runner for Michael Clarke, then scored on a ground-rule double by Babe Walker.

Earlier, Marshall catcher and Texas A&M signee Cameron Haller gave the Mavericks (20-10) a 1-0 lead in the first inning when he homered on a first-pitch fastball from William Adair.

It was one of the few mistakes Adair made, as he struck out eight and limited Marshall to four hits in six innings.

“Nothing gets him down and he’ll out-compete anybody,” Yoder said of his pitcher.

Adair had to work around a bit of trouble in the third inning when Marshall loaded the bases on an error and back-to-back walks, but Adair struck out Nathan Hicks with a fastball on the outside corner.

“When you put the ball in the hands of William Adair, you know you are going to be in a good spot with a senior captain and leader,” Yoder said. “He didn’t have his best stuff. But he was good enough and competed at a level we needed to win.”

Grayson Jones picked up the save after striking out three batters on just 10 pitches in the seventh inning. 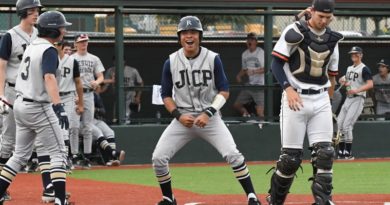