It’s been 13 years since Jesuit joined the UIL. The Rangers have made 10 playoff appearances during that time, and have advanced past the first round in each of the last five seasons — with two district titles during that span.

“I feel like we’re at another level,” said Jesuit head coach Brandon Hickman. “I think the target is on our back more. Teams are trying to knock us off. I feel good about where our program is at.”

Hickman is hopeful that the Rangers can continue to raise the bar this season behind a young roster that includes just 20 seniors and will lack varsity experience in some key areas.

“He did a great job when his number was called,” Hickman said. “He’s groomed, he’s ready, and he knows the system.”

Returning receiver Fletcher Rosenbleeth should be a factor, while linebackers Hank Bitterman and Nicky Prendergast will lead an inexperienced defensive unit.

The Rangers will meet both defending Class 6A state champions — DeSoto and Lake Travis — in nondistrict play. It’s the same schedule that caused them to start 0-3 last year, although Jesuit bounced back with eight consecutive wins, including an unbeaten run through District 9-6A.

“I thought it was a confidence builder for our kids,” Hickman said. “We used those losses as a positive and found some things we needed to work on. Our kids did a great job of hanging in there against them.” 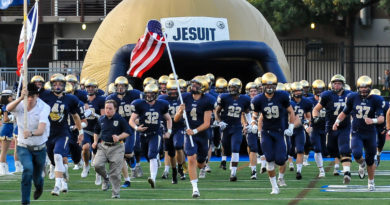