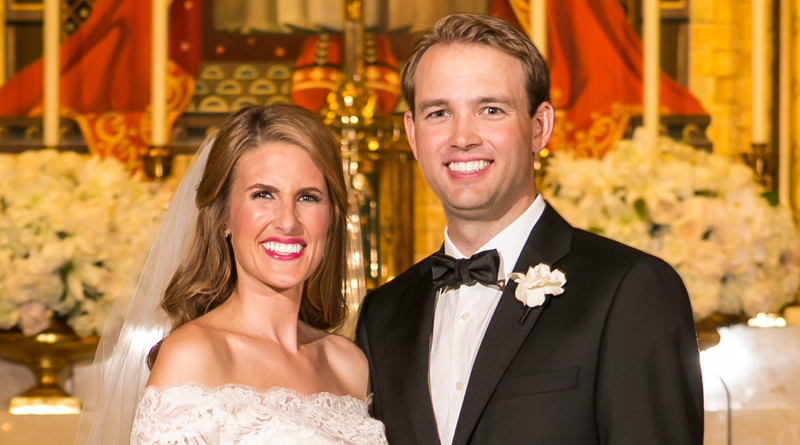 Delores “Dee” Elece Wallander and Matthew Milton Rindt were united in the Sacrament of Holy Matrimony on May 13, 2017 at 7:30 PM at Christ the King Catholic Church in Dallas. The ceremony was celebrated that evening by Monsignor Donald Zimmerman, M. Th. with scripture readings by Wesley Scott and Kendall Harelson. Music was provided by bagpiper Don Shannon, trumpeter Don Burks, organist Thomas Pavlechko, Jay Majernik on timpani, and the Strings Serenade string quartet.

Immediately following the ceremony, guests enjoyed a cocktail hour followed by a reception of dining and dancing to the the music of the Emerald City Band at The Ritz-Carlton, Dallas.

During the cocktail hour, hors d’oeuvres included prosciutto and goat cheese crostini, chicken pepita tacos, mini crab cakes, short rib with polenta; and guests enjoyed the couple’s specialty cocktails, the Blushing Bride, a pink French 75, or the Grinning Groom, an old-fashioned. Once the ballroom doors opened, guests proceeded to their tables and the bride and groom entered and danced to their first song, “The Way You Look Tonight,” by Frank Sinatra.

The bride’s cake, a white layered confection with white chocolate mousse and strawberries surrounded by white buttercream icing was created by Panini Bakery & Cakes. The groom’s Texas-size chocolate cake with chocolate Texas pecan filling enrobed in coffee buttercream was provided by The Ritz-Carlton. Favors were heart-shaped chocolate truffles from CocoAndré Chocolatier. Carter Rose of f8studio captured all the emotion and elegance of the occasion for posterity while Khoi Pham of Pro Edit Productions handled the videography. Jackson Durham Events masterfully created the floral arrangements for the wedding and reception. Wedding planner, Kristin Butler, of Fabulous Fête, oversaw all the details of the wedding and reception, making sure every magical moment was celebrated with style and finesse.

The bride is the daughter of Angela and William Wallander of Preston Hollow. She is the granddaughter of Elece and Beverly Scott of Williamsburg, Virginia and Delores and Charles Wallander of Dallas.

The groom is the son of Kathleen and John Rindt of El Paso, Texas. He is the grandson of Mrs. Milton Gilmer Rindt of Brookfield, Wisconsin and the late Mr. Rindt, and the late Mr. and Mrs. Joseph James Barden.

The bride was given in marriage by her parents. She was escorted down the aisle on the arm of her father. Dee wore a couture Anna Maier-Ulla Maija off-the-shoulder gown from Warren Barrón Bridal. She paired the lacy dress with a custom-made jacket by Michael Faircloth, a veil of soft white silk illusion, a cathedral-length train and a pair of Jimmy Choos. For her “something old,” Dee had her maiden monogram sewn under her dress. Her bridal bouquet was a classic selection of all white flowers, wrapped with a family rosary. Dee’s hair was done by Sonia Trevino and makeup was done by Mayra Rams-Sanabria of My Fabulous Faces. The groom wore a custom tuxedo by Zahid Bheda of Bedali Su Misura.

The bride is a graduate of Ursuline Academy of Dallas. She received a Bachelor of Arts in government from the University of Texas at Austin, and a J.D. and M.B.A. from Texas Tech University School of Law and Jerry S. Rawls College of Business. Dee is a Stewardship Associate for the George W. Bush Presidential Center.

The groom is a graduate of Coronado High School in El Paso. He received a Bachelor of Arts in English from Baylor University and a J.D. from Texas Tech University School of Law. Matthew is an attorney for Gerstle, Minissale & Snelson, LLP.

Following their honeymoon to Maui, Hawaii, the couple have happily made Dallas their home.