Synthetic turf has come a long way since the Brady Bunch and the Astrodome, but not improved enough to satisfy Highland Park town council member Margo Goodwin.

“I don’t want artificial turf next to me,” she said. “To me plastic is plastic and not natural looking like Highland Park.”

Nevertheless, town staff and council members have been discussing since June the possibility of removing a 2012 prohibition on artificial turf in front yards and other places visible from town streets, sidewalks, or alleys.

They plan to ask residents for feedback during a meeting early next year, likely in January, town administrator Bill Lindley said.

“This could help those who can’t grow anything in the front yard,” Mayor Joel Williams said.

Many residents are tired of resodding shaded areas where grass won’t grow and don’t like groundcover because of the potential for mosquito infestation, the mayor said.

The discussions began after Denny Carreker spent $32,000 to have SynLawn install 3,000-square-feet of synthetic turf in what he considered his backyard.

Town staff notified him of a violation. Because his home is on a double fronting lot created in 2006 by merging 4328 St. Johns Drive into 4321 Overhill Drive, it legally has two front yards.

Rather than removing and replacing the synthetic turf near St. Johns Drive at a cost of $14,000, Carreker sought a variance – something not allowed under the existing ordinance. He also made council members aware of illegally installed synthetic turf in the front yard of a home in the 3500 block of Crescent Avenue.

At least 10 other property owners have inquired with the town this year about using artificial turf in their front yards, according to a town memo.

In October, staff raised the possibility of including artificial turf in the impervious surfaces such as driveways and sidewalks allowed in front yards. Town regulations limit such surfaces to 50 percent of a front yard.

But council members said they wanted public input before making any changes to the rules.

Goodwin said, “I don’t think we’ve heard from the people who are very opposed to plastic.”

Presents for Children in Parkieville 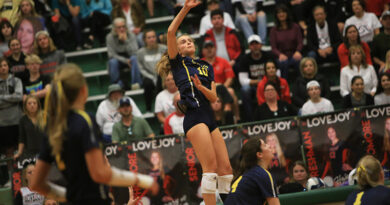