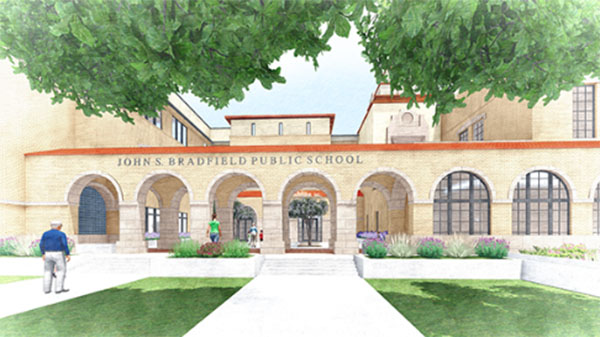 Architectural drawings show no pitched roof, no double-hung windows, and no cast stone decorative quatrefoils like those common on the 91-year-old school building facing demolition.

“Quatrefoil is basically our town logo,” Kristen Woolery, an interior designer and one of many residents fighting for changes, told the Highland Park Town Council in April. “We can’t neglect our architectural integrity. We have a responsibility to future generations.”

Even efforts to add Spanish Colonial Revival details to the design by Stantec, the district’s architectural firm, have been met with derision from residents who formed a group called Concerned Park Cities Citizens. At concernedpccitizen.com, Woolery and designer Melissa Gerstle describe proposed detailing as overdone, stylized, out of scale, unbalanced, incorrect, and inappropriate.

“There’s a right and a wrong when it comes to our architecture history,” Woolery said. “We’re about to tear down a 91-year-old building, and we need to replace it with one that will stand the test of time in Highland Park for the next 100 years.”

However, Woolery and others seeking to get the district to “pause, rethink, [and] adjust” its elementary school rebuilding plans are running out of time with Bradfield.

The Town Council has already approved the planned development district zoning and site plan for the school, clearing the way for the district to proceed with demolition and reconstruction as soon as the school lets out for the summer.

But council members got district leaders to agree to submit the Bradfield designs to nonbinding peer review by Russell Windham, a Houston architect with a practice committed to the classical tradition.

In coming weeks, Windham, working pro bono for the town, will review plans and brainstorm with Stantec architects to find affordable aesthetic changes aimed at making the new building better fit within the neighborhood beside Highland Park Village.

“I’d love for our buildings to be dripping in stone like SMU,” he said, but the district doesn’t have that kind of money.

Town and district leaders called the peer review agreement a compromise that allows the district to keep to a tight construction schedule aimed at opening the new Bradfield in time for the 2019-2020 school year, while creating an opportunity to address concerns about the look of the building.

“This was a good example of how a government works – a compromise that gives everyone something they want,” Hitzelberger said.

However, those who object to repositioning the school building on the Bradfield campus and having some portions of it go three stories tall likely won’t get what they want.

After nearly two hours of public comments mostly opposed to the district’s plan, Town Council members gave the district permission to locate the new school building on the wider west end of the campus, instead of the east end where the school is now, and include a three-story section with a height of 47.3 feet.

District leaders said they are not open to changing those details at this point.

They’ll only need to return to the Town Council if the School Board wants to implement any of the proposed aesthetic changes, and superintendent Tom Trigg expects board members will want to do so. “We’ve always said that we were open to the idea of changing the look of the school,” Trigg said.

-William Taylor contributed to this article.

Read more about this developing story:

UP Boy May Soon Be Free From Tripping Habit 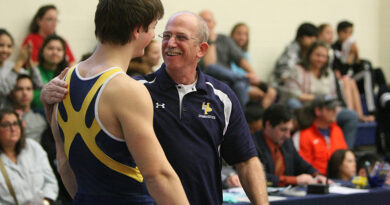