The lure of working at the Perot Museum of Nature and Science was too much for Linda Silver to pass up – even from her post in Abu Dhabi.

Silver was hired as the museum’s chief executive officer in March of 2017 after a highly successful stint in the United Arab Emirates, where she helped the country establish plans for its first-ever science center.

With her son set to begin school at Jesuit and her daughter enrolled at St. Alcuin, it was a natural choice for Silver and her family to settle down in North Dallas.

“My children were used to such an in-depth education in Abu Dhabi, and I was blown away by how quality the schools are,” she said.

“The job [at the Perot] was perfect, but if I had to move two teenagers to Texas, it was important for me to find schools that could match what I wanted for my kids.”

With her children happily settled in school, Silver turned her attention to the ever-expanding, never-static nature of Dallas’ 180,000 square-foot facility that, among 11 other permanent exhibits, hosts a renown dinosaur exhibit featuring a full-sized Tyrannosaurus Rex skeleton.

Since Silver began, the museum has set in motion plans for several more dinosaur-related events, including an “Ultimate Dinosaurs” exhibit in June, “DinoFest” over Labor Day weekend, Star Wars-themed exhibits and activities on May 4 and 5, and the continuation of Social Science Nights, where adults 21-years-old and older can enjoy a different approach to touring the museum.

It’s all a part of the museum’s plan to “refresh” the existing exhibits over an eight-year period, while also adding new ones, Silver said.

“One of the pillars of this museum is to show that science is never static,” she said.

“Science is always evolving and changing, so it’s important that our exhibits represent that.”

In 2017 alone, the museum served more than 600,000 people with workshops, stations, lectures, school field trips and other demonstrations.

Those are numbers Silver is used to: she once organized a science festival in Abu Dhabi that drew 150,000 people in 10 days.

It’s imperative that children become enthusiastic about science at a young age, Silver said, as studies have shown, that’s when the seeds are planted for the eventual pursuit of a career in the fields of technology, science, engineering, and math.

That’s one of the reasons why Silver lights up when talking about Fridays at the museum – the busiest day of the week for school field trips.

“There’s always examples you hear of these scientists who, at a young age, saw an exhibit that stuck with them, or learned something at a museum that really peaked their interest,” Silver said. 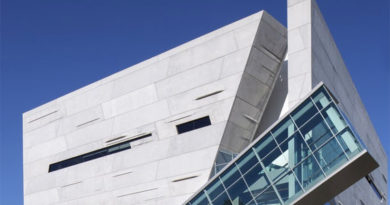