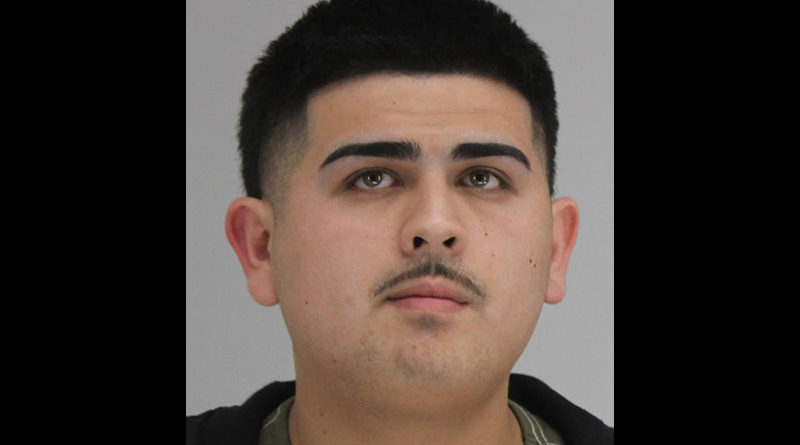 UPDATE: Dallas Police Department has released video surveillance from Thursdays killing of former Highland Park High School student Joseph Pintucci. The recent update from the department also includes a sketch of a second suspect believed to be the shooter.

(Above: Rene Eduardo Montanez Jr., 23, has been charged with capital murder for his role in Thursday’s killing)

The second suspect is described as male, between 18-19 years of age, 5’6” tall, 130 pounds, and in his mouth has a gold teeth grill with diamonds.

Dallas Police officers have already arrested one suspect in the shooting death. Rene Eduardo Montanez Jr., 23, has been charged with capital murder for his role in Thursday’s killing of Joseph Pintucci.

Montanez Jr. has a previous arrest record that involves driving under the influence (2015) and possession of marijuana (2018), according to public data records.

Pintucci, 18, was found slumped over in the driver’s seat of a white 2002 Lincoln sedan at 10:07 p.m. Thursday in the Whole Foods Market parking garage at the Shops at Park Lane. He was rushed to the hospital, where he died from his injuries, according to the Dallas Police Department blog.

An arrest warrant affidavit states the shooting was the result of a potential drug deal gone wrong. According to the affidavit, three suspects approached Pintucci’s vehicle, pulled out guns, and demanded drugs.

Jon Dahlander, HPISD chief of staff and director of communication, said Pintucci had transferred out of the district in March 2018.

“Grief counselors were available at the high school today to assist any individuals who may have been upset by this tragedy,” Dahlander said. “We offer our sincere condolences to the family.”

Pintucci’s uncle Ben Harrington, of University Park, posted on Facebook: “My beautiful, wonderful nephew Joey, who I have raised since he was 6, was murdered last night aged 18. No words.”

Belles Serving Pasta Prior to Kickoff

Visit Wonderland With HPMS This Weekend

I Don’t Like Onions. Cook it Right. And Leave it on the Porch if I’m at the Mall or Something.