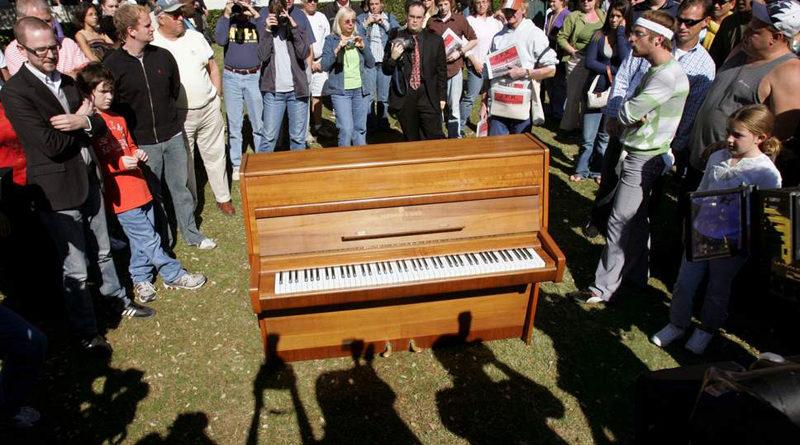 Now, imagine a different world, a world without violence, hatred, or anguish; imagine a world of peace. This sentiment echoes the lyrics to John Lennon’s 1971 song, “Imagine,” which illustrates the heart and soul of the song.

The chestnut upright Steinway piano on which John Lennon composed “Imagine” will be making its last stop in the United States at The Goss-Michael Foundation in Dallas.

The public is invited to see the piano Wednesday, May 8 through Saturday, May 11, from 10 a.m. until 5 p.m. each day. Admission is free.

Concurrently, the exhibition on display at The Goss-Michael Foundation, Marc Quinn: History & Violence also represents the conflicts throughout the world as interpreted by the artist.

“These works are sort of reflecting how I perceived the mood of the world – with conflict and social tectonic plates shifting around the globe. A sense of the geology of society changing,” said Marc Quinn. “They’re about how the news cycle is populating our minds. About how we see these things happening all over the world, and how we live with them as this kind of virtual reality of news becomes our reality. And about how overwhelming it all is.”

The piano was originally showcased at an exhibit at the former Goss Gallery in Dallas in 2007 and then went on the IMAGINE Piano Peace Project Tour in the U.S., stopping at sites where horrific acts of violence have occurred.

“Both George and I believed that the past events in the United States and those that continue today around the world remind us that violence is, unfortunately, a part of our everyday life,” Said Kenny Goss, co-founder, The Goss-Michael Foundation. “Through the presence of John Lennon’s piano at these historic locations and now, here in Dallas, the goal is to promote the message of peace as conveyed in the iconic song ‘Imagine.

The piano continues to represent a message of peace and the hope for a world without violence.”

At each site, the piano was photographed representing an article of peace amidst a background with a violent past. The photographs were taken by noted UK photographer Caroline True, who was also the creative director for the IMAGINE Piano Peace Project Tour.

“Kenny Goss and George Michael’s deepest wish was to imagine a world of peace, a world without violence,” said Caroline True, IMAGINE Piano Peace Project photographer and creative director.  “The selection of the sites evoked a deep sense of emotion for everyone.  Capturing these images of this special piano on which a song of peace was composed is part of the heartbeat of this project.”