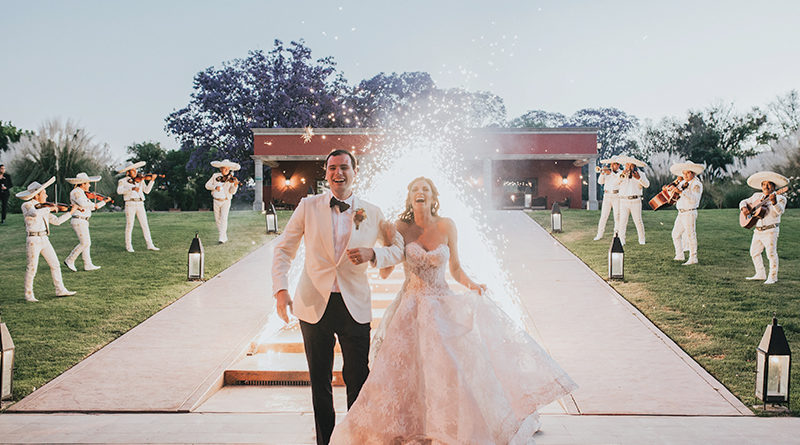 Elizabeth Jo Adams and Edward Chappell Bernet were united in holy matrimony March 23, 2019 at the Rosewood San Miguel de Allende, high in the mountains of Central Mexico. Their sunset ceremony was officiated by Elly Ferrell Hutchings. The parents of the bride also hosted the reception at Rosewood San Miguel de Allende. Guests enjoyed tacos, tequila, music and breathtaking views of the Parroquia. Members of Chap’s family played their first dance, “Tonight I’ll Be Staying Here With You” by Bob Dylan. Several guests took their turn at the mic including the groom. A rehearsal dinner, hosted by the parents of the groom, was held on the Thursday before the wedding at Casa San Pancho. A welcome parade and party, hosted by several Dallas families, was held on the eve of the wedding at the Rosewood San Miguel de Allende.

The bride is the daughter of Ann and Frank Adams of Dallas. She is the granddaughter of Jo and Bob Scroggs of Hawarden, Iowa and the late Jean and Major General Milton Adams of Austin, Texas.

The bride was presented in marriage by her parents. She was escorted down the aisle on the arm of her father. Elizabeth wore a stunning, Spanish lace, strapless gown by Monique Lhuillier. Her earrings were her late grandmother’s, her pearl ring was borrowed from her other grandmother, and lace from Chap’s grandmother’s wedding gown was sewn into the hem of her dress. Elizabeth borrowed her veil from her older sister. The blue sapphire fashioned to her bouquet was her father’s first wedding anniversary gift to her mother. Assisting the bride as maids of honor were her sisters, Caroline Adams and Stacy Hicks. Her bridesmaids included Melanie Proctor, Georgie Ferrell, Mary Margaret Shamburger, Erica Hubble, Francis Nolan, Laura Wright, Ellie O’Neil, Daisy Bernet, Phoebe Bernet, and Elizabeth Bernet. Among the members of the house party were Casey Yates, Dulaney Archibald, Ellen Toland, Clare Holden, Erin Costello, Ashley Fatjo, Andrea Pond, Sarah Holden, Kellye Thomas, McBride Oden, Emily Vaughan, Christina Dabney, Hilary Holmes, Brenna Seifert, Laine Deutscher, Robin Brock, and Katie Williamson. Eloise and Scarlett Hicks were the flower girls.

The bride is a graduate of Highland Park High School. She received a Corporate Communications degree from the University of Texas. Elizabeth works for Suretone Management as a digital marketing director which has taken her social media marketing career into the music industry.

The groom is a graduate of Highland Park High School. He received a degree in English from Texas Tech University. Chap is employed by APA in the corporate division of talent booking.

Following their wedding trip to French Polynesia, the couple have made their home in Nashville, Tenn.