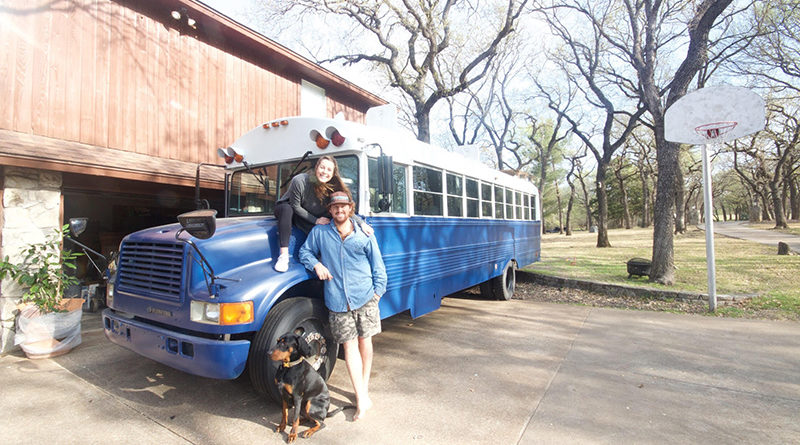 Dallas native and Highland Park High School alumnus Wes Cole always knew he wanted to go on a long-term camping adventure. Then he met his future wife, Nicole, at the University of Texas.

(ABOVE: After working the last few years at Camp Ozark, where many Park Cities and Preston Hollow children spend the summer, Wes and Nicole Cole are ready for a camping trip of their own. The couple and their dog, Booker, will depart in July. Champ, the school bus, didn’t look like much when the Coles bought it in Oklahoma. Courtesy photos)

Though she shared his passion for adventure, she was not exactly down to spend a year roughing it in a rooftop tent.

Vans were affordable but would be too small for the couple and their dog, Booker. New RVs were too expensive and used RVs had dated stale interiors. Frustrated by their options, they searched for ideas online and settled on an unusual solution.

School buses provide many advantages over tents, RVs, and vans. They’re well-built, reliable, and cheap — buses in good condition can be had for $10,000 from a dealer or $2,000 at auction, and they provide ample interior space for total customization, Wes said.

After months of searching, Wes and Nicole found their bus for $3,200 in Choctaw, Oklahoma, and named it Champ.

Though the bus already ran well, their mechanic got it ready for a 30,000-mile adventure. Next, Wes and Nicole pulled out the seats and recouped some of their initial investment by selling the wheelchair lift that was mounted at the back.

With the bus gutted and running, they could begin the real fun of designing and building the interior. They had help from Nicole’s dad, who lent them tools and DIY wisdom, and their friend Brett, a professional van customizer and owner of Austin-based Chewy Design Co.

Nicole’s preference for clean and natural looks guided the interior design process. She chose to paint the walls white. “It makes the space look a lot bigger,” she said.

Sunlight from the many windows adds to a bright, open feel. Natural wood flooring, counters, and accents help to create a fresh, at-home vibe.

The kitchen features four gas burners, an oven, a full-size sink, and a Yeti cooler, making it easy to go beyond standard camping fare.

The custom couch cushions in the front provide ample space for entertaining and fold out into a guest bed. A king-size bed is in a private bedroom at the back.

Wes is most proud of the rooftop deck he built.

“It’s just a cool place to either look at the stars, watch the sunset, just take in different moments and scenery,” he said.

The bold blue and white exterior paint was a Christmas gift from Nicole’s mom.

They will set off for the first leg of their trip in July, spend the Fourth in Arkansas, then head off to explore the eastern United States. Keep up with them on Instagram @campwithchamp.

They’re not totally sure about every destination — they’ll have the freedom to improvise and detour as they travel. But no matter where Champ takes them, they’ll always be right at home. 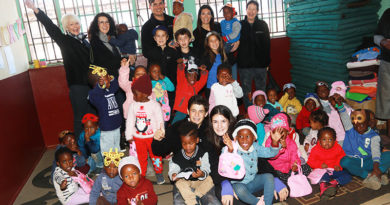 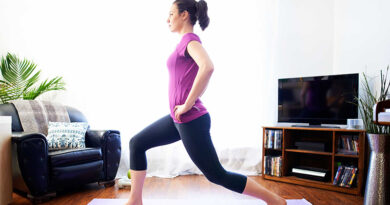 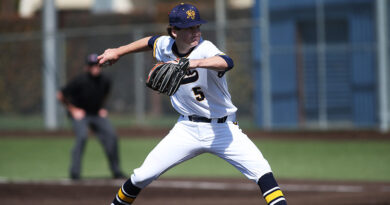