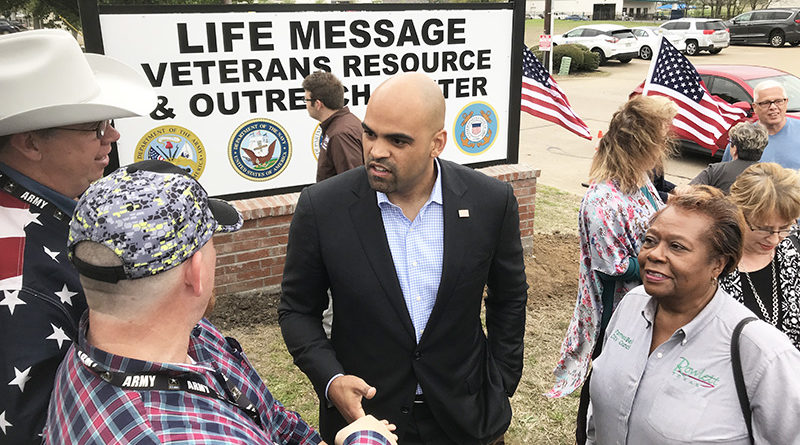 Colin Allred came to Capitol Hill in January as a recently elected Democrat congressman from North Texas touting a balanced perspective on partisanship.

Faithful to his campaign promises, the former lawyer for the U.S. Department of Housing and Urban Development fought to protect the Affordable Care Act.

“I came here to be a workhorse, not a show horse.” -Colin Allred

He also co-sponsored a House bill to outlaw private firearms sales that don’t have background checks conducted by a licensed dealer. Other bills he co-sponsored called for paycheck fairness, action on climate change, and allowing openly transgender people to serve in the military.

But Allred said he understands teamwork having played football for Dallas’ Hillcrest High, Baylor University, and the Tennessee Titans.

The former linebacker knew he wouldn’t get much done on Capitol Hill without Republican support.

“I do believe in reaching common ground,” Allred said.

In a six-month report to constituents, Allred noted that 70 percent of the 110 bills he co-sponsored are bipartisan.

“That is not accidental,” he said. “With that kind of support, our bills have a good chance of passing, becoming law, and helping people in North Texas.”

Allred’s committee assignments are Transportation and Infrastructure, Foreign Affairs, and Veterans Affairs. He chose them because the issues they tackle also tend to be bipartisan.

Allred has also chosen when to oppose some issues that other Democrats favor. In July he joined Republicans to kill a resolution calling for the impeachment of President Donald Trump. He was among 137 Democrats to do so.

Opponents of the measure have said there’s no evidence so far implicating the president in impeachable high crimes and misdemeanors.

However, the resolution’s defeat angered some members of the Democrats’ liberal base who want to see Trump gone.

“I take the Constitutional duty of oversight and the power of impeachment very seriously,” Allred said. “The resolution that we voted on did not meet the standard for such a serious action, and that’s why I voted to table it.”

“I have worked hard to earn the support of those who did not support me in the last election, and (I) hope that my bipartisan record of real achievements will allow me to continue to serve the district I was born and raised in and am honored to represent,” he said.

Meanwhile, other members of the House Democrats’ “freshman” class are becoming known for challenging their party’s leadership, calling for economic boycotts against Israel, or postings on social media.

Allred didn’t have much to say about that, except: “I came here to be a workhorse, not a show horse.”

District 11 Update: It's Over