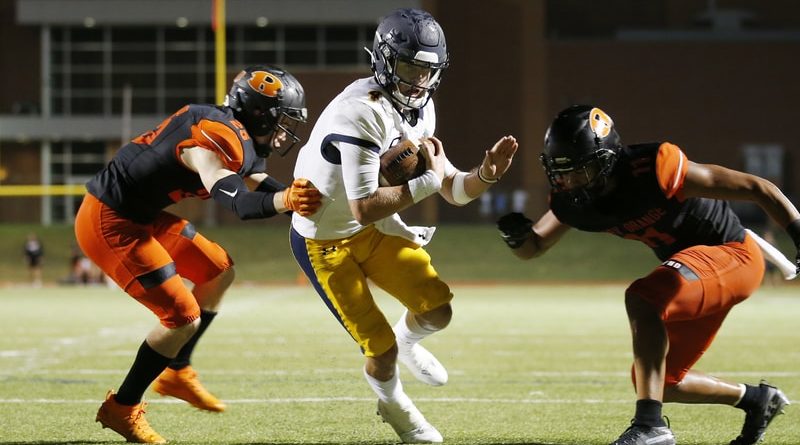 ROCKWALL — Chandler Morris accounted for nine touchdowns, and Highland Park needed every one of them to defeat Rockwall in its season opener on Friday.

Morris’ heroics, combined with a pivotal fourth-quarter interception by Prince Dorbah, keyed the wild 66-59 win at Wilkerson-Sanders Memorial Stadium that was just provided practically a whole season’s worth of big plays and momentum swings.

The Scots (1-0) stretched their winning streak to 32 games, and avenged their most recent loss in the 2017 opener on the same field, when the Yellowjackets (0-1) stunned HP late.

Morris passed for 474 yards and five touchdowns, and ran for another 180 yards and four scores. He completed 27 of 43 throws, and even caught a pass.

“He had a tremendous game and showed his real toughness,” said HP head coach Randy Allen. “I didn’t want to run him as much as I did, but when he started scrambling, it really started opening up things in our offense in the second half. We were doing what we had to do to win.”

The Scots racked up a phenomenal 781 yards of total offense, yet couldn’t put Rockwall away until the closing seconds because the Jackets had a potent offense of their own.

Those numbers would be enough to win almost any other game, but Morris and the resilient Scots seemed to show more resolve as the game progressed.

The Jackets assumed a 24-7 advantage early in the second quarter by taking advantage of two interceptions by Jake Edwards, as well as a blocked field goal attempt.

Locke was 9-of-11 for 154 yards passing in the first quarter, as HP struggled to contain the speed of Rockwall’s up-tempo offense, both individually and collectively.

However, the Scots battled back with 17 consecutive points in the final 8:18 of the second quarter. Morris scampered 49 yards on cut the deficit to 31-21. Then a short punt gave HP favorable field position, leading to a Wesley Winters field goal.

The Scots drove 80 yards in five plays on their next possession, capped by a 27-yard pass from Morris to Case Savage to tie the game at 31 just before halftime.

“In the first half, they were clicking on all cylinders. They weren’t making any mistakes, and that quarterback threw some pinpoint passes to those great receivers,” Allen said. “When you can take their best punch and leave the first half tied, that’s a sign of a good football team.”

The surge continued into the third quarter, when the HP defense made a fourth-down stop in Rockwall territory when the Jackets gambled. Just three snaps later, Morris gave the Scots a 38-31 advantage with a 40-yard scoring run.

“They had a big run, and we had to answer,” said Rockwall head coach Rodney Webb. “To some degree, things kind of balanced out. But that was probably the difference in the game, being up 17 and not being able to maintain it.”

From there, the teams traded big plays and found the end zone on each of the next five drives. Locke connected with Smith-Njigba on a 65-yard touchdown strike. Morris found Savage for a 64-yard score. Henry rumbled in from 28 yards out. Morris and Ben Smith connected on a touchdown pass.

By the time Locke hooked up with Brenden Bayes for a 35-yard score on the opening play of the fourth quarter, it was tied at 52 and the stage was set for a frantic finish.

“[Locke] played a great game all night,” Webb said.” When you play a sophomore quarterback, you’re going to get a little bit of the good, the bad, and the ugly. But for his first varsity football game, I thought he was outstanding.”

HP reached the Rockwall 6-yard line on its next possession before being stuffed on fourth down. But the Scots atoned shortly thereafter, when Morris was banged up briefly before finding his way over the goal line from 19 yards out, giving HP a lead at 59-52 that it never relinquished.

Then, in a game that featured almost 1,500 yards of total offense, the HP defense made perhaps the biggest play of the night. Dorbah, the standout defensive end who is committed to Texas, snared his first career interception deep in Rockwall territory with 5:06 remaining.

“That was the turnover we needed. It came at the perfect time,” Allen said. “We had to keep making plays until the very end.”

The Jackets answered with a 75-yard bomb from Locke to Smith-Njigba to get back within seven points, but didn’t have enough time to complete a late rally.

Savage finished with six receptions for 143 yards and two touchdowns, while Smith added nine grabs for 135 yards and another score. Hunter Heath caught the first two touchdown passes from Morris before exiting with an injury. Will Anderson filled in admirably with 115 yards of total offense, mostly in the second half.

“I thought our depth was really going to be a difference tonight. When we started cramping, we’re two-deep at every position,” Allen said. “A lot of guys who didn’t start got to play major roles in the game.”

Next up, HP will face another Class 6A opponent on the road when it travels to meet Mesquite Horn on Sept. 6 at Hanby Stadium. 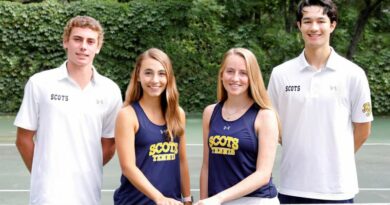 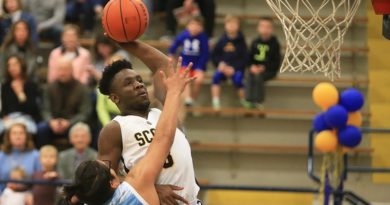