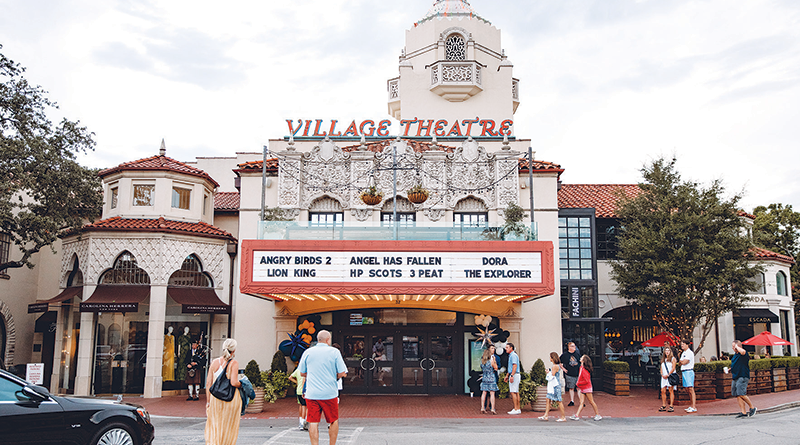 That’s why fans can file into Highland Park Village Theatre to cheer again the big plays that won three consecutive Class 5A Division I state championships.

Dallas-based documentary filmmaker Mickey Holden has made another movie about the school’s gridiron success.

The History of Highland Park Football premiered on Fox Sports Southwest in 2014. His Highland Park Three Peat Film explores the challenges overcome by the 2016, 2017, and 2018 teams.

“It’s just a story about three different teams and their journey to get there,” said Christopher McGuire.

McGuire and Duke Jimerson, both real estate professionals with Compass, agreed to sponsor the film after Holden approached them months ago.

Both were on Scots teams in the 1990s before Allen was the coach.

For premier screenings in August, they had a bagpiper outside to alert Highland Park Village shoppers to the special occasion. Just inside, Highland Belles greeted moviegoers, and at the top of the escalator, cheerleaders passed out gift bags.

Audience members, as they waited, speculated about what another promising season might bring and recalled fond memories of the ones just passed.

“Spoiler alert,” one man told those on the rows behind him. “I know how it ends. We win.”

The movie’s title, of course, makes the outcomes evident to even those who may not have paid attention to recent seasons.

Still, Holden, by focusing on the challenges each team faced, succeeds in building tension as the stories unfold. The film explores injuries, unexpected losses, and difficult-to-swallow decisions about who gets to start.

The movie also covers the brief retirement of Allen, who was feeling tired after winning back-to-back championships, but almost immediately regretted stepping away.

The highlights were well chosen, but my favorite parts were the interviews with the players.

Though they trafficked some in clichés we’ve come to expect from athletes after games, the Scots players also brought a youthful frankness to their accounts.

They’re brash, funny, and authentic. I wanted to cheer them on again.

Jimerson and McGuire expect a slightly condensed version of the documentary to air on Fox Sports this fall, probably no later than October. There’s no word yet on whether DVDs will be available.

If you get a chance, check out this film and hear Allen wax poetic about what it means to coach and play for Highland Park.