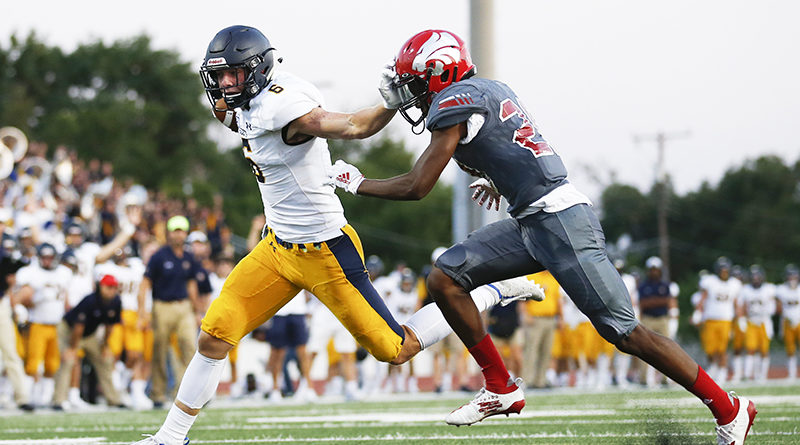 Paxton Anderson might have been born to play football, but lately, his body seems to have had other ideas.

Anderson’s emergence as a top receiving target this season for Highland Park comes after two straight years of head-to-toe injuries that have prevented him from showcasing what he can do.

“This year, I can just prove how I can contribute to the team and show what I can do at the next level,” Anderson said. “I’ve been working really hard in the offseason. I’m seeing it pay off a little bit.”

During his sophomore season on the HP junior varsity squad, Anderson broke his fibula, and then his collarbone. Last year, he missed seven games with mono, and then pulled a calf muscle in his first game following his return.

I had to grind and try to get back in shape for my senior year. I’ve just got to play through pain.
Paxton Anderson

“I’ve always had injuries,” he said. “I had to grind and try to get back in shape for my senior year. I’ve just got to play through pain.” -Paxton Anderson As a son of Dallas Cowboys executive vice president Charlotte Jones Anderson, and a grandson of team owner Jerry Jones, Paxton Anderson has grown up around the game at the highest level.

Like many youngsters, he dabbled in several sports. He played lacrosse until his freshman year, and still competes in basketball with the prestigious Texas Titans select team, alongside HP classmate Prince Dorbah.

Football remained a constant, but until he got to middle school, Anderson figured he would likely play defense. Coaches decided his lanky frame would be a better fit as a receiver.

He caught his first varsity pass as a sophomore. Last season, he had five more receptions in limited action. It wasn’t until a non-district win over Mesquite Horn in early September that he finally reached the end zone.

“Paxton may be the most improved player on the team,” said HP head coach Randy Allen. “He and [quarterback Chandler] Morris have a good chemistry. I’m very pleased with what he’s brought to our offense.”

Anderson hasn’t totally abandoned the hardwood. The 6-foot-3 sharpshooter plans to join the HP basketball team for his senior season after football is done.

However, his primary focus remains on football, not only capturing another Class 5A Division I state title this fall, but hopefully also extending his career at the college level.