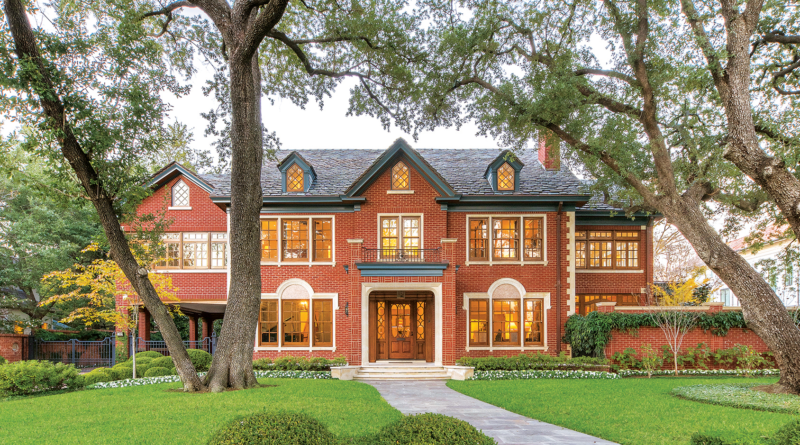 Torie Steele took on the complex remodel of 4224 Armstrong Pkwy., designed by the late Hal Thomson, and with the help of Larson and Pedigo Architects, gave her historic mansion modern amenities and sophistication.

Now for sale, the single-family home, built in 1928, boasts five bedrooms and 7.5 baths.

The 11,459-square-foot mansion sits on 0.51 acres, and with 17 rooms, family members should have no problem finding somewhere to be alone or places to entertain.

Through the years, only a handful of families have occupied the home, including Virginia McAlester. The Harvard graduate authored A Field Guide to American Houses, using text, drawings, and photos to break down American House Styles in a way that even novices can understand.

Dan Rhodes with The Rhodes Group of Compass is tasked with selling this masterpiece, listed for $14.528 million.

“Steele took the skeleton of the original structure and made it shine by seamlessly blending both new and old.” -Dan Rhodes

“The house was done well,” he said. “The quality and craftsmanship are second to none.”

The house includes luxuries such as heated floors, generators, plaster walls, and molding and has an elevator that goes to all four levels.

The original architect, Thomas, created some of Dallas’s grandest homes in the most prestigious areas and was considered a master of different designs such as Tudor, Georgian, and Neoclassical.

His best-known works include a Georgian Revival-style home at 5439 Swiss Ave., and the Aldredge House at 5500 Swiss Ave. He also designed the Cotton Exchange Building and collaborated on the Dallas Aquarium at Fair Park.

“Steele took the skeleton of the original structure and made it shine by seamlessly blending both new and old,” Rhodes said.

The tile and stone surfaces come from Italy, Portugal, and Mexico, and the hardware and fixtures come from England, France, and Italy, Rhodes said. “The designer paid close attention to detail when creating this beautiful home.”

Mattito’s to Set Up Shop at Central & Forest