CBS 11 reports a second fentanyl overdose is expected to be connected to an alleged drug trafficking operation that led to the indictment of two Park Cities residents.

The TV station reports the information came to light at a hearing in Sherman Wednesday.

Gina Corwin, 51, and Gary Collin Bussell, 50, are among 10 indicted on seven counts of drugs and weapons-related charges. A combined task force of federal, state and local law enforcement executed federal arrest warrants as the result of an Organized Crime Drug Enforcement Task Force (OCDETF) Strike Force investigation in the North Texas Area Oct. 30, according to U.S. Attorney’s Office for the Eastern District of Texas.

The operation, which started as early as 2014, was uncovered after an overdose death in Fairview in December of 2018 was linked to the use of fentanyl and alprazolam from the suspects, according to court records.

They made initial appearances the week of Oct. 28 and the Dallas Morning News reported Allbrook pleaded not guilty to two of the seven counts. 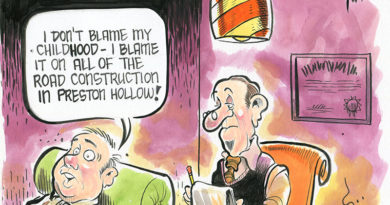